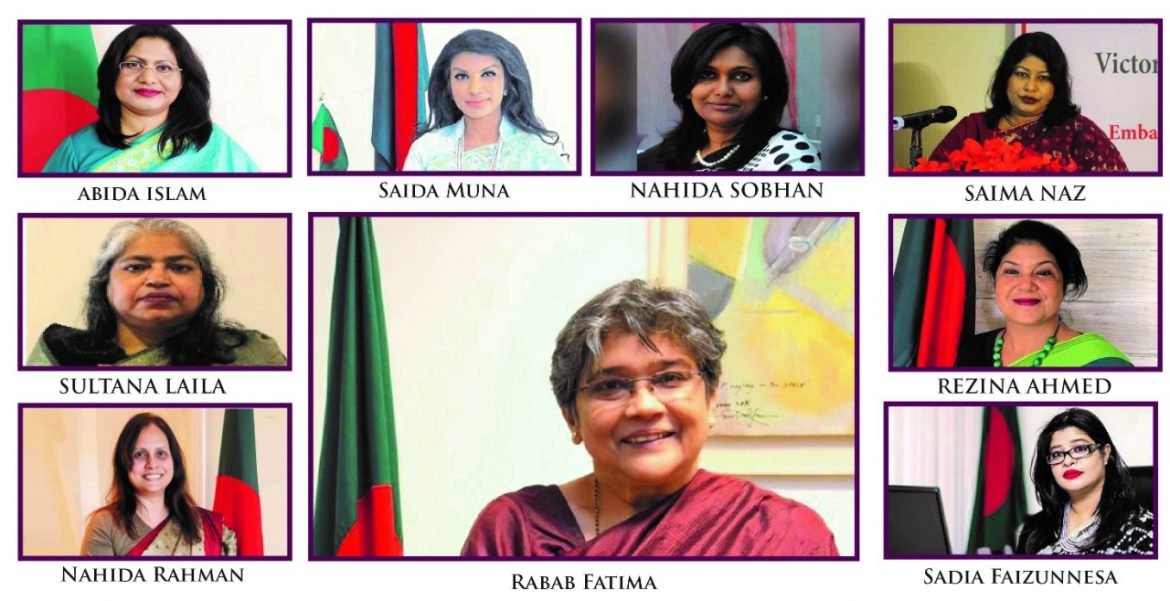 Women of Bangladesh are contributing significantly to the cause of the country’s diplomatic interests as in various other fields. Women have been serving as the Ambassadors of Bangladesh missions in different countries of the world. They are also playing a bright role in their respective fields of work. The country got its first female diplomat eight years after its emergence as an independent state. But the nation had to wait another 17 years to get a female ambassador on foreign soil. In other words, a woman was sent as an ambassador after long 25 years of independence. It took another six years for Bangladesh to bring another woman in the role of ambassador. However, Bangladesh in the last few years brought a radical change in appointing females as diplomats. At present, there are currently nine women ambassadors and high commissioners representing the country in Asia, Africa, Europe, and the Americas.

Permanent Representative of Bangladesh to the United Nations Rabab Fatima presented her credentials to the UN Secretary General on 6 December 2019. Prior to taking up her current post, she was Bangladesh’s Ambassador to Japan since February 2016. Ambassador Fatima joined the Bangladesh Foreign Service in 1989. She served in various Bangladesh missions including, as the First Secretary to UN Permanent Mission in New York; Counsellor, Deputy High Commission, Kolkata; Counsellor, Permanent Mission to the UN, Geneva; and Minister & DCM, Embassy in Beijing. She served in various positions including, as Assistant Secretary (UN), Director (UN) and Director General (East Asia & Pacific) in the Ministry of Foreign Affairs. Fatima served in two international organizations, namely, the Commonwealth Secretariat, London, as Head of Human Rights; and the International Organization for Migration as the Regional Representative for South Asia; and as the Regional Adviser for South and South-west Asia & Regional Adviser for Climate Change and Migration in IOM’s Regional Office for Asia and the Pacific. As the IOM’s Regional Representative for South Asia, in 2011, she oversaw the return of nearly 37,000 Bangladeshi migrant workers from Libya to Bangladesh following the outbreak of conflict. She was also actively engaged with the successful implementation of reintegration programme for these migrant workers.

Saida Muna Tasneem is a Bangladeshi diplomat now serving as the High Commissioner to the UK, and Ambassador to Ireland and Liberia, and the first female to hold those positions. Tasneem was formerly the High Commissioner to Thailand and Cambodia and Bangladesh’s representative to the United Nations Economic and Social Commission for Asia and the Pacific. Tasneem began working with the Foreign Service in 1993. The Ministry of Foreign Affairs recalled Tasneem from her posting to Bangladesh’s UN in June 2004. On 1st May 2019, Tasneem attended a reception at Buckingham Palace, where she presented her letter of credence to Queen Elizabeth II. During the meeting, Tasneem wished the Queen for good health and prosperity, and made the request for two forests in Bangladesh to be included under the Queen’s Commonwealth Canopy while the Queen praised Bangladesh’s economic growth and women empowerment. High Commissioner Tasneem has served as an expert in a number of National Committees on security issues including the National Defence Policy of Bangladesh drafting Committee, revision of Bangladesh’s War Book, Member Secretary to the National Committee on UN Security Council Resolutions, National Task Force on repatriation of Myanmar Refugees, National Committee on Anti-money Laundering and Financing of Terrorism, National Task Force on Anti-money Laundering and repatriation and served as the Women in Development (WID) focal point for Ministry of Foreign Affairs. High Commissioner Tasneem specializes in countering terrorism and security issues, Women Empowerment, Climate Change and sustainable energy, migration and development, communications and public diplomacy. She takes special interest in issues relating to the Asian and the pacific.

Rezina Ahmed is working as the Ambassador of Bangladesh in Mauritius. Rezina Ahmed joined the Ministry of Foreign Affairs after working for a year at the private company BRAC. When she joined with eight foreign cadres during her time, she was the only female officer. Expressing satisfaction over the participation of women diplomats in foreign missions, she said, “The number of women diplomats is increasing, it is promising. At present there are eight women ambassadors including me. Apart from the ambassador, there are also women diplomats in various positions in different missions. If you go to the ministry, you can see that the number of women diplomats in different positions has increased a lot. As an ambassador, I have had to face many challenges to come here; it’s not just the external environment that has to be fought, I had to keep everything in order including my family.”

Samina Naz chose the profession of diplomat 25 years ago. Samina Naz joined the service in 1995 as a professional diplomat. Samina Naz believes that it has become easier for her to fulfill her responsibilities with the encouragement of her father in the beginning and later with the help of her husband, children and colleagues. She is now the Ambassador of Bangladesh to Vietnam. She succeeded in taking up the challenge of opening a Bangladesh mission in an important city like Mumbai. During her stay as Deputy High Commissioner in Mumbai, Samina Naz rescued hundreds of trafficked women and children from Bangladesh and sent them back to the country. During her tenure as ambassador to Vietnam, she repatriated 116 Bangladeshis who fell into the trap of human trafficking last year.

Sultana Laila Hossain is serving as Bangladesh’s Ambassador to Poland. She is also serving as the ‘equivalent’ ambassador of three other countries on behalf of Bangladesh. She has always faced many challenges while performing her duties as a diplomat. Laila has handled challenging tasks such as repatriating Bangladeshis stranded in the Libya conflict, hostages held by pirates in Somalia or rescuing the captives held in Afghanistan. At present, this woman diplomat is leading a difficult task like safe repatriation of Bangladeshis from the battlefield of Russia and Ukraine war. She has been able to repatriate most of the Bangladeshis in Ukraine to safe havens. She is still working to evacuate remaining Bangladeshis from the country to safe quarters.

Nahida Sobhan is a Bangladeshi diplomat who is the first female diplomat in the Middle East. She served as Jordanian Ambassador from January 1, 2020. Earlier, she served as the Director General of the UN Department in the Ministry of Foreign Affairs. Sobhan served in various capacities at Bangladesh missions in Rome, Kolkata and Geneva. She has spent most of her 25-year diplomatic career dealing with multilateral diplomacy, including the United Nations, and immigration for at least a decade. In her own experience, she thinks that the Ministry of Foreign Affairs of Bangladesh is quite women-friendly. At the same time, the Bangladesh government is aware of creating a women-friendly environment in government service. Even then, it is important to get the sincere encouragement and support of the family for any challenging task. Otherwise, it is difficult for a woman to advance in her professional life with a goal.

Nahida Rahman Shumona joined as Bangladesh Ambassador to Brunei in 2020. Prior to taking over as Ambassador, she served as the Director General of the Consular Section in Dhaka. She suggested launching the embassy’s mobile app in 2016 to make it easier for expatriates to get consular services abroad, in addition to making consular services easier. With this app anyone can now easily take consular services. This 17th batch officer of BCS Foreign Cadre has previously served in various capacities in Ottawa, Kolkata and Canberra missions.

Each of these women flag-bearers are contributing to the betterment of Bangladesh’s image across the world as well as in tackling major crises in their respective positions and capacities. In addition to ambassadors or high commissioners, many other women in the country are holding important positions in foreign missions as well. Foreign Ministry sources in Dhaka said further emphasis has been placed on increasing the number of female diplomats in recent times to brand Bangladesh in a better way.