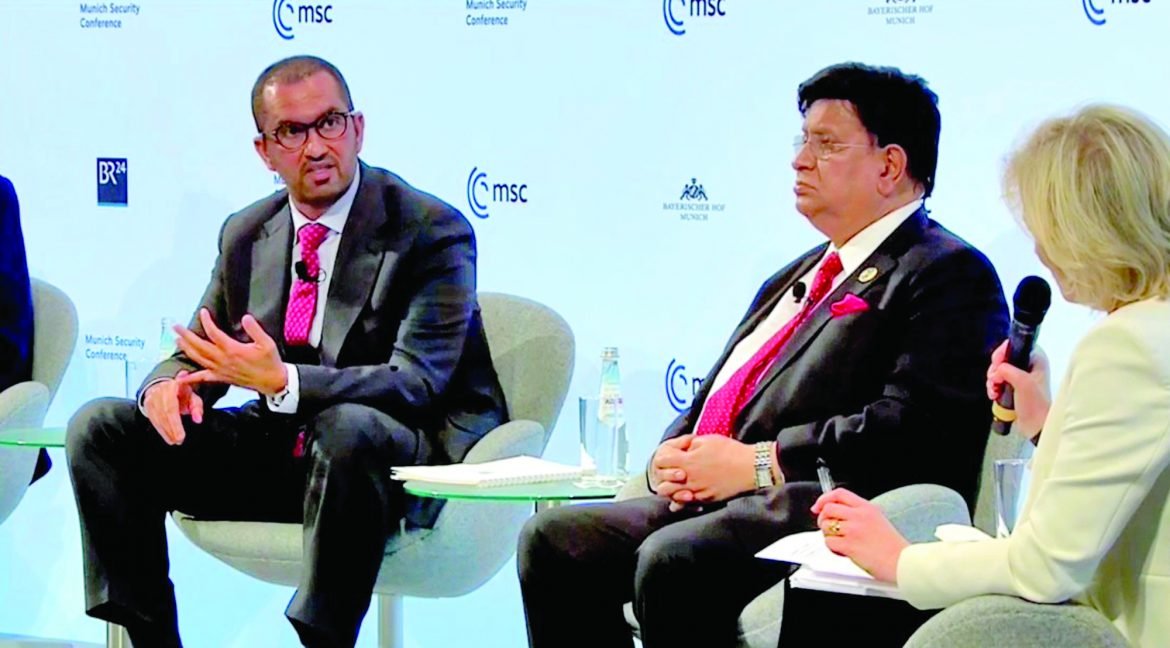 Bangladesh in the 58th Munich Security conference talked about global issues relating national interests, border conflicts, global humanitarian circumstances, geopolitical fundamentals, economical status and future goals and allies along with demurrages Bangladesh expects to receive due to climate change. On completion, a bilateral meeting was held between the foreign ministers of Bangladesh and India in Paris, where two sides talked about various issues including Teesta water sharing and Rohingya crisis, reports Press Xpress

As the 58th Munich Security Conference (MSC) ended on February 20, Dhaka focussed on seeking assurance with regard to climate finance and technological, financial assistance in the conference as Foreign Minister (FM) Dr AK Abdul Momen considered climate change as the most important issue in the wake of Covid-19 pandemic and Ukraine crisis. The three-day conference was held in the Hotel Bayerischer Hof in Munich, Germany. The annual conference focuses on international security threats and policies being the largest conference of this criterion. Every year, it gathers over 350 top officials from more than 70 nations to participate in a robust discussion over ongoing and future security concerns. The Munich Security Conference has established itself as the most significant and independent platform for international security policy makers.

The MSC this year accepted fewer guests and media representatives, as well as smaller delegations than the yesteryears in order to preserve the health and safety of its participants and the people of Munich. However, the event was fruitful in terms of discussions and decisions that were enlisted for talks. Wolfgang Ischinger, Chair of the Munich Security Conference, coined this year’s ceremony by focusing on the importance of discussions among the global leaders by stating, “Our world is in danger. Traditional certainties are crumbling, threats and vulnerabilities are multiplying, and the rules-based order is increasingly under attack. The need for dialogue has never been greater.”

FM Momen highlighted the adverse effects climate vulnerable countries like Bangladesh are facing and urged the significance of financial and technological supports from influential countries. FM Momen also reminded the Paris Climate Conference commitment of $100 billion annual aid. It is to mention here, global climate change issue was selected as the top existential security threat in the index.

In addition to that, FM demanded the developed countries to provide funding to help develop infrastructure, education and technology sector. International leaders from public and private sectors addressed the issues and decided to come under the same umbrella to resolve conflicts.

He asked developed country leaders to involve in country’s development sector with greater funding as they demanded Bangladesh not to engage with China in getting bilateral large donations.

FM Momen thanked Japan and India for providing support in the past. “While other countries and financial institutions have not been able to meet Bangladesh’s investment expectations, China has come forward with a basket of money. They have come up with agreeable and affordable proposals. What do we do now? Foreign Minister announced this question at the conference. Many countries around the world, especially the Quad member countries, are debating the ‘Chinese debt trap’. In that context, FM Momen raised the question.

India’s Foreign Minister, Jaishankar, gave an indicative answer to Bangladesh’s question on whether the US-led quad alliances would be able to provide as much financial assistance as China. “Countries need to think twice before taking loans to build infrastructure projects that are not commercially viable,” the Indian minister noted. “Otherwise,” he said, “fragile infrastructure will be created.”

Pointing to some Chinese investments in Sri Lanka, Jaishankar said that they had released China because they could not carry out Chinese-funded projects there. “We are seeing debt-ridden countries in many places, including our region,” he said. We have seen projects where unsustainable commercial airports have been built. There is no flight. We see the construction of harbours where ships do not sail. However, Momen said, “Development is going on in Bangladesh. In this reality, it is difficult to decide what should be done. The people demand more infrastructure.”

Besides, escalation of Russia-Ukraine tension and military deployment was discussed in a different session of the Munich conference, where FM Momen expressed his concern over the issue as it could widely influence global peace and typical diplomacy. This year, Munich Security conference scheduled its primary focus on western strategy to face the Ukraine crisis, despite no representative from Russia was present in the conference.

Antonio Guterres tagged the conflict in Ukraine as “catastrophic” and demanded to de-escalate military engagements. In other statement US vice President Kamala Harris labelled the tension as ‘Russia crises’ instead of ‘Ukraine crises’. The attendees came to the concurrence that, the world leaders should be more concerned about military interventions and avoid war situations in any circumstances. India-China border conflict at the Line of Actual Control (LAC) was discussed under “Regional order and security in the Indo-Pacific” topic. Indian FM Jaishankar compared the crisis with Ukraine issue.

In another discussion, FM Momen urged global leaders to fight Covid-19 together and described the significance of contributions provided by developing and under developed countries in distribution of vaccines. He proposed to tag vaccines as ‘global public goods’ and ensure vaccine equity all over the world. Incidentally, WHO Directorate General expressed his anxiety over global vaccination progress stating, 83% of the population of Africa is yet to receive a single dose of vaccine, in a statement given to the conference.

Prior to that, FM Momen and Australian FM Marise Payne joined bilateral meeting on the sideline of Munich Security Conference, where they greeted and applauded the two countries for completing 50 years in bilateral diplomatic ties. The discussion promised to supplement and manifold political and economic cooperation under Trade and Investment Framework (TIFA) signed in 2021. Payne showed her interest in importing pharmaceutical items and exporting wools as Momen called for increasing the volume of trade between the countries.

Furthermore, for the sustainability and future goals, FM Momen proposed to collaborate with Australian government in offshore gas exploration and invest in renewable energy sector. Besides, Payne thanked Bangladesh for standing with a humanitarian approach towards Rohingya ethnicity and assured to provide all sorts of aid in treating the refugees. Moreover, both the countries showed interest in inaugurating direct flights. Both the countries reassure their stance for global peace, tolerance and collaboration eradicating poverty, hunger and terrorism.

After the Munich conference, a bilateral meeting was held between the foreign ministers of Bangladesh and India in Paris at the ministerial level for India-Pacific Cooperation. After the meeting on February 21, Indian Foreign Minister Jaishankar said in a tweet, “We are committed to taking India-Bangladesh relations to a unique height in 2022.”

According to a press release issued by the Ministry of Foreign Affairs in Bangladesh, FM Abdul Momen during the meeting with the Indian Foreign Minister reiterated his commitment to conclude the Teesta Water Sharing Agreement and talked to the latter about his involvement in the Rohingya issue. The two countries also agreed to continue discussions on the Kushiyara River water sharing.