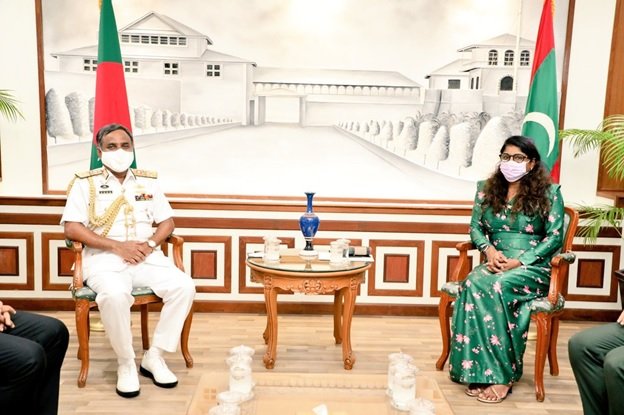 Bangladesh Navy has witnessed phenomenal growth in the past three decades. It is evolving into a truly three-dimensional navy capable of maintaining an effective posture across the full spectrum of any conflict at sea. Regional cooperation in safeguarding maritime boundary has come to the fore in recent time with the Navy chief’s recent visits to two South Asian countries contributing to the growing cooperation in maritime domain, writes Nashir Uddin

Bangladesh Navy is inching towards its goal of becoming a three-dimensional force capable of operating above, on, and under water, based on its envisaged ‘Forces Goal 2030.’ In keeping with this goal, regional cooperation in safeguarding maritime boundary has come to the fore in recent times. Bangladesh Navy (BN) Chief Admiral M Shaheen Iqbal’s January 14-23 visits to two South Asian countries bode well with the growing significance of cooperation in maritime domain.
The Navy chief had his visit to Maldives in the first leg of the tour, which was the first of its kind made by a Chief of Naval Staff of Bangladesh Navy. This four-day tour during January 14-17 signifies the enhanced relationship between the Armed Forces of both countries, and reflects the strength and solidity of the Maldivian government’s policy of international defence diplomacy and cooperation, according to the Ministry of Defence, Maldives.

During the historic visit, the Navy chief paid a courtesy call on Maldivian Defence Minister Mariya Didi and Chief of Defence Force Major General Abdulla Shamaal on January 16. During the meetings, they discussed issues of mutual interest. Their talks focused on continued defence and security sector cooperation with the two countries especially in the maritime domain. It also focused on ways to further boost cooperation between the two countries’ navies, including the provision of training opportunities for Maldivian officers and sailors.
Admiral M Shaheen also exchanged views with the top military officials of Maldives and held a bilateral meeting. He also visited the Bangladesh High Commission in Male and held a meeting with Bangladesh High Commissioner Mohammad Nazmul Hassan. There, the Navy chief was informed of various aspects of Bangladesh-Maldives relationship.
On January 19, the Chief of Bangladesh’s Naval Staff called on Sri Lankan Navy Commander Vice Admiral Nishantha Ulugetenne at the Navy Headquarters in the Sri Lankan capital. During the cordial meeting that ensued, both Admiral M Shaheen Iqbal and Vice Admiral Nishantha Ulugetenne shared views on several matters that are relevant to both navies and recalled cordial, mutually supportive, and long-standing relations between Bangladesh and Sri Lanka.

The bilateral discussion drew to a close with an exchange of mementos to mark goodwill and camaraderie. About the Navy chief’s recent visits to two South Asian countries, the Foreign Ministry sources in Dhaka said Bangladesh and Maldives were working on launching a direct shipping service between the two countries, with a stopover in Sri Lanka, as Bangladesh is seeking to boost regional connectivity.
However, Navy has witnessed phenomenal growth over the course of the past three decades. It is evolving into a truly three-dimensional navy capable of maintaining an effective posture across the full spectrum of any conflict at sea. Notwithstanding the fact that the Navy has already made significant investments, there is still a need for new equipment as the Navy faces major challenges as many of its ageing units are in urgent need of replacement.
As of 2013, about a third of the military hardware procured under the plan has been for the Bangladesh Navy. It procured two refurbished Type 053H2 (Jianghu III) frigates from China in 2014. Two United States Coast Guard High Endurance Cutters joined the BN in 2013 and 2015 which are being used as patrol frigates. Navy also bought an ex-Royal Navy Roebuck-class survey vessel and two ex-Royal Navy Castle-class offshore patrol vessels (OPVs), which were converted to guided missile corvettes in 2011.
Two Type 056 corvettes joined the BN in 2016 while two more were ordered in July 2015 and they are awaiting commissioning. Two Durjoy-class large patrol craft (LPCs) were built in China and joined the Navy in 2013. Two more ships of the same class with dedicated ASW (Anti-submarine warfare) capabilities were commissioned in 2017. Five Padma-class patrol vessels were commissioned into the Navy back in 2013.
Besides, multiple indigenous built LCUs (Landing Craft Utilities) and LCTs (landing craft tanks) have been added to the BN. The Navy opened its aviation wing on 14 July 2011 with the induction of two Agusta Westland AW109 helicopters. Later on, two Dornier 228NG MPA were also introduced in 2013. To attain underwater operational capabilities, the Navy inducted two off-the-shelf Type 035G (Ming class) submarines from China on 12 March 2017.
A new base for the BN, named BNS Sher-e-Bangla, is being constructed at Rabanabad in Patuakhali. It will be the largest naval base of the BN with submarine berthing and aviation facilities. Meanwhile, a separate submarine base, named BNS Sheikh Hasina, is under construction at Pekua in Cox’s Bazar. A full-fledged naval base, named BNS Sheikh Mujib, has been commissioned in Khilkhet, Dhaka. This is the only operational base in Dhaka naval region.
Recently Bangladesh showed interest to purchase five naval ships from the United Kingdom as part of its ‘Forces Goal 2030’ military modernization program. By doing this, Bangladesh wants to acquire additional sea assets to improve monitoring and protection of its maritime territory. The Navy has been working to contain the ageing of its fleet too. As the force is yet to have a good name for having 8 frigates in service, with an additional 6 needed just to replace aged hulls – conscious quarters say this doesn’t look like it’ll happen by 2030 unless they sign another deal or build more locally themselves at the Khulna Shipyard’s second site.
The Navy has prepared a master plan to spend thousands of crores to ensure the security of the country’s 1,18,813 sq. km of sea territory. It has long-term plans to build ships in the naval yards for various maritime agencies to secure maritime interests as well as to make forays into shipbuilding to support the government for attaining the Sustainable Development Goals and the Blue Economy in future.
Launched in 2009 and revised in 2017, the Forces Goal 2030 is designed to improve the capabilities of Bangladesh armed forces. For the Navy, the aim of the scheme is to transform the service into a modern, well-equipped force that can conduct multi-domain operations. So far, the service has reportedly experienced significant growth in firepower and weapons manufacturing. The acquisition of five additional naval ships is expected to bolster the country’s overall defence capacities.