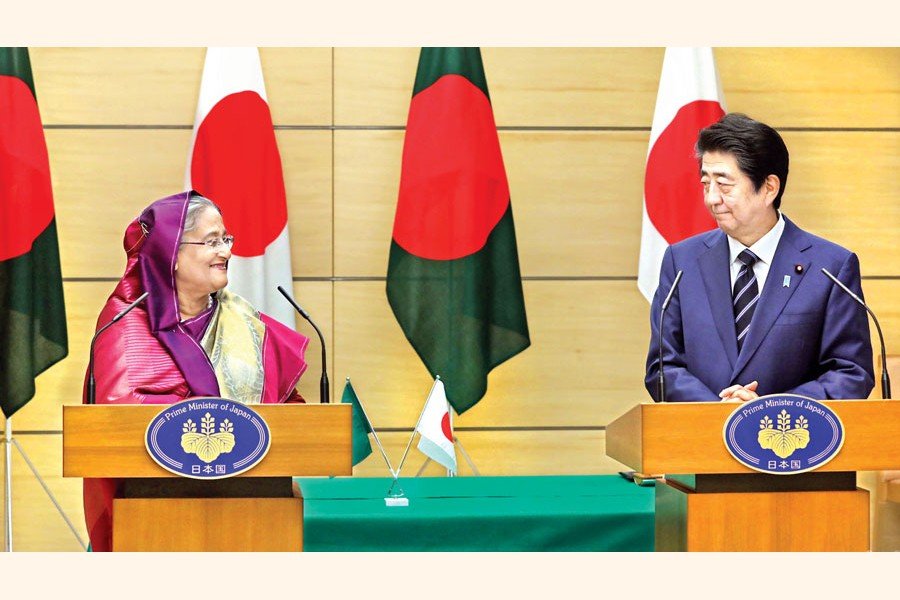 Mutual support and cooperation between Bangladesh and Japan have produced excellent results and deepened trust between the governments. In private economic sector, the bilateral relations have also increasingly strengthened and diversified. This relation can be strengthened further through signing FTA, accelerating investments in SEZs, cooperating on vaccine co-production and supporting each other in multilateral forums, reports Munaseeb Hossain

Bangladesh is set to mark the golden jubilee of its diplomatic relations with Japan within days aimed at taking the ties to even greater heights. The bond of friendship between Bangladesh and Japan is strengthened and reinforced through bilateral relations. Despite an asymmetry in status and economic power, Japan-Bangladesh relations illustrate successful and harmonious ties between a developed and a developing country.

This year, Japan is celebrating 50 years of diplomatic relations with Bangladesh, and 70 years with India, Pakistan, and Sri Lanka. The country has designated 2022 as “Japan-Southwest Asian Exchange Year,” with the aim of taking Japan’s relations with the seven countries of Southwest Asia (Bangladesh, Bhutan, India, Maldives, Nepal, Pakistan, and Sri Lanka) even further.

Events and programs include lecture and roundtable titled “Relief for Bangladesh! Looking back on the citizens’ movement 50 years ago,” manufacture and sale of the “50th Anniversary of the Establishment of Bangladesh-Japan Diplomatic Relations” Commemorative 50 Taka Silver Proof Coin, among others.

Looking back, one can find that the epitome of existing mutual understanding and cordial relations between the people of Bangladesh and Japan has historical foundations. According to a Japanese Professor Tsuyoshi Nara, some of the earliest evidence of close contact between the two nations goes back to around four hundred years when the Japanese fine artists carried back a widely-used colour from Bengal to Japan, still known as Bengaru (Bengal) colour.

On a bigger canvas, the foundation of this bond between the two nations is euphorically established on four commonalities: food habit, as they are fond of rice and fish; religious reminiscences, as Buddhism migrated to Japan from this land; anthropological affinity, as they look alike in physical appearance; and natural harmony, as both the lands have mountains, sea, rivers, and greenery.

Close contact between these two nations go back to the early years of the twentieth century, when Rabindranath Tagore, who visited Japan six times, and Tenshin Okakura, a distinguished Japanese fine arts scholar, plus Taikan Yokoyama, a Japanese master of painting, profoundly affected and influenced each other’s work through their friendship. During the hundred years of twentieth century, only Bengali and Japanese writers got the Noble Prize in Literature in Asia; one is Rabindranath Tagore and the two others are Japanese Yansunary Kawabata and Kenjaburey Ole.

Political relations between the two countries cemented the perspectives of the anti-British Revolutionary Movement, particularly through Rash Behari Bose, a Bengali revolutionary leader. Japan became the main centre of Bengali revolutionaries in exile. On 16th February 1942, General Tojo, the then-Prime Minister of Japan, in a declaration, supported the cause of Indian independence.

As Tagore and Bose were both Bengalis, the Japanese people have had special regard, respect and fellow feelings for the people of Bengal, compared to people of other regions in greater India.

Back in 1971, the Japanese people and the government became very sympathetic and helpful in the matter of Bangladesh’s freedom struggle – although Japan was an ardent ally of the United States at that time. Bangladesh–Japan relations were established on 10th February 1972. Immediately after the recognition, Japan dispatched an economic mission under the leadership of Takeshi Hayakawa to Bangladesh, to stand by the country in rebuilding and rehabilitating its war-ravaged economy.

Japanese emperor Hirohito once said, “As long as there will be Japan, Bengali food shortage and the financial problem will be overseen. Japan will be a selfless friend forever to Bangladesh.”

Since then, the relationship and economic cooperation between these two Asian countries have been growing stronger. Since 1985, Bangladesh has ranked first as the recipient of Japanese grant and that too with a moderate rate of increase annually. Japan is a major development partner for Bangladesh – extending support to the efforts of Bangladesh for its economic and social development. The two governments signed the Agreement on Technical Cooperation between Japan and Bangladesh on 8th December 2002 to strengthen further mutual technical cooperation by consolidating its infrastructure and simplifying its process under a single umbrella framework.

Japan and Bangladesh have been maintaining a cordial relationship in an atmosphere of goodwill and cooperation for the last five decades. Japan has consistently maintained significant, effective and stable relations, which are characterised by mutual trust and cordial friendship and are actively committed to Bangladesh’s efforts in development.

Japan International Cooperation Agency (JICA) is a top bilateral donor in Bangladesh, which aims to support the people in Bangladesh. JICA focuses on two pillars, one is accelerating sustainable economic growth and the other one is overcoming poverty. As the support for economic growth, JICA cooperates in infrastructure development such as transportation and electricity, and also provides support for revitalising private sector. In order to overcome various social vulnerabilities to overcome poverty, JICA also provides support in the field of basic education, healthcare, rural development, governance, and disaster countermeasures in Bangladesh.

Furthermore, Japan’s assistance to Bangladesh in achieving the Sustainable Development Goals (SDGs) contributes not only to the stable development of the South Asian region, but also to the peace and stability of the international community, and is therefore highly necessary for Japan’s foreign policy.

JICA also hopes to provide support for integrated development of Moheshkhali-Matarbari area to make it an energy and power hub in the region. JICA and the International Organization for Migration (IOM) constructed a deep borehole and a water distribution system in Kutupalong camp for Rohingya’s. This is the largest water supply system at the Rohingya camp, which can supply safe water to nearly 30,000 people.

Japan External Trade Organization (JETRO) assists potential Bangladeshi entrepreneurs (mostly those of SMEs) to export to Japan as well as to promote industrial & technical co-operation and to attract Japanese Investment in Bangladesh. Also, JETRO maintains excellent relationship with the government and chambers of commerce and industry here. It coordinates and overseas, participation of Bangladesh in a number of programmes organised by JETRO headquarters time to time. JETRO also conducts technical seminars and training programmes in here.

Bangladesh has been able to maintain an average growth rate of 6.6 per cent over the last decade. The notable projects that Japan provided loans and grants for infrastructural development projects in Bangladesh include Mass Rapid Transit in Dhaka and Matarbari Port. Under the strategic ‘Bay of Bengal Industrial Growth Belt’ scheme, Japan sees Bangladesh as a gateway to South and Southeast Asia.

On 5th August 2020, JICA signed a loan agreement with Bangladesh to provide $330 million for COVID-19 crisis management in a bid to mitigate socio-economic impacts of the virus. With the final batch of consignments arriving at the airport in Dhaka on 28th August last, Japan completed its commitment to provide 3.2 million vaccines to Bangladesh under COVAX.

It is worth mentioning that Japan has consistently supported Bangladesh’s efforts toward the realisation of “Sonar Bangla” since its independence. Japan also attaches importance to Bangladesh’s socio-economic development such as health and education and extends support meeting the needs of Bangladesh. Japan has also assured to continue to work with Bangladesh to realize a free and open Indo-Pacific.

Japan has also been assisting Bangladesh to mitigate the economic and social drawbacks of implementing the SDGs. The country’s bilateral ties with Japan range from socio-economic to people-to-people links. But this relationship can be strengthened further through signing a free trade agreement (FTA), accelerating investments in special economic zones (SEZs), cooperating on vaccine co-production and supporting each other in multilateral forums.

In fine, what’s notable is half a century is no small time in the history of foreign relations. From that perspective, the five decades of Japan-Bangladesh friendship deserve special mention. No doubt, the challenge ahead is to widen the scope of cooperation, particularly economic relations, to optimise the benefits of friendly ties between the two friendly governments. Japan’s impacts are clearly visible now on almost all aspects of Bangladesh society. To sign off for now, one can only hope that the friendly ties between Bangladesh and Japan continue and grow stronger in the days to come.