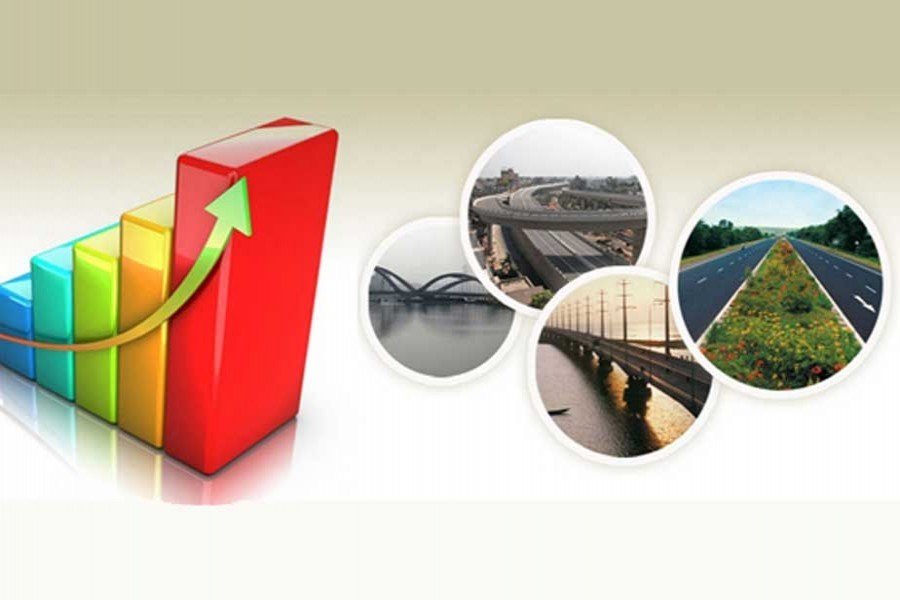 Bangladesh is no longer an economic basket case. It’s rather a model for developing countries. No other countries in the region have made such economic progress in 50 years including in development of road, transport, public health and infrastructure. With a GDP of over $409 billion, Bangladesh currently has the world’s 37th largest economy and forecasts suggest that the size of the economy could double by 2030, reports Press Xpress

Bangladesh has been among the fastest growing economies in the world over the past decade, supported by a demographic dividend, strong ready-made garment (RMG) exports, and stable macroeconomic conditions. The country is also on track to graduate from the UN’s Least Developed Countries (LDC) list in 2026. Bangladesh’s poverty fell from 43.5% to 14.3% in two decades, while the garment industry in the last seven years increased its annual revenue from $19 billion to $34 billion recording a 79% rise, according to the International Finance Corporation (IFC).
The World Bank (WB) in the Global Economic Prospects report released globally on January 11 said Bangladesh’s economy is projected to grow 6.9 per cent in fiscal year 2022-23 thanks to strong export growth and a rebound in domestic demand. The multilateral lender had forecast that gross domestic product (GDP) would expand 6.4 per cent in the current fiscal year of 2021-22 ending this coming June, up 1.3 percentage points from its last June projection of 5.1 per cent for the fiscal.
For the next fiscal year 2022-23, the WB raised forecast for Bangladesh by 0.7 percentage points from 6.2 per cent. WB said output in South Asia is projected to expand by 7.6 per cent in 2022, accelerating from 7 per cent the previous year, as Covid-19 vaccination progresses and contact-intensive sectors recover. Output losses compared to pre-pandemic trends remain significant in the region. Fiscal policy will support growth, but unwind, over the forecast horizon.
Per capita income growth continues to catch up to advanced-economy levels, but at about half the pace prior to the pandemic. The WB, however, said following a strong rebound in 2021, the global economy is entering a pronounced slowdown amid fresh threats from Covid-19 variants and a rise in inflation, debt, and income inequality that could endanger the recovery in emerging and developing economies.
The multilateral lending agency said at a time when governments in many developing economies lack the policy space to support activity if needed, new Covid-19 outbreaks, persistent supply-chain bottlenecks and inflationary pressures, and elevated financial vulnerabilities in large swaths of the world could increase the risk of a hard landing.
The WB also stated that Bangladesh needs to address the challenge of containing COVID-19. Vaccinating the population will reduce the incidence of the disease and mortality and enable the full resumption of economic activities. The country also needs to address the challenge of creating jobs/employment opportunities through a competitive business environment, increased human capital and skilled labour force, efficient infrastructure, and a policy environment that attracts private investments.
Other development priorities include diversifying exports beyond the RMG sector; deepening the financial sector; making urbanisation more sustainable and strengthening public institutions. Addressing infrastructure gaps would accelerate growth and reduce spatial disparities in opportunities across regions and within cities. Addressing vulnerability to climate change and natural disasters will help Bangladesh to continue to build resilience to future shocks. Pivoting towards green growth would support the sustainability of development outcomes for the next generation.
The WB report states that the growth prospects have improved since June 2021, largely because of better prospects in Bangladesh, India, and Pakistan. Bangladesh Government’s twin policy initiatives–‘Vision 2021’ and ‘Digital Bangladesh’ envisage Bangladesh becoming a Middle-Income country by 2021 and a developed country by 2041. The WB earlier upgraded Bangladesh a Lower Middle-Income country in 2015 and projected it to be one of the top 24th economies in the world by 2030.
Bangladesh has also emerged as an important manufacturing base for textile products, pharmaceuticals, finished leathers, jute and jute goods, light and medium industries, IT, light engineering products, and small ocean-going vessels. Bangladesh is also harnessing the power and productivity of its youthful workforce. Bangladesh’s educational system produces more than 500,000 university graduates every year, and more than 65,000 of the graduates receive training in Information Technology Enabled Services (ITES).
Regional growth is expected to accelerate to 7.6 per cent in 2022 as pandemic-related disruptions fade, before slowing to 6.0 per cent in 2023. In most economies, monetary and fiscal policies are expected to remain broadly accommodative in 2022, but gradually shift to a focus on fiscal sustainability and anchoring inflation expectations. Despite the upward revision to growth, output in 2023 is still projected to be almost 8.0 per cent lower than projected before the pandemic. Additionally, the pace of per capita income catch-up with advanced economies is expected to slow over the forecast horizon.
Currently, Bangladesh’s 98% of children nationwide have finished primary school, with more girls in secondary school than boys. Experts say the Muslim-majority nation over the years has invested heavily in the lives of girls and women. It has also made progress in combating child malnutrition and reproductive health.
While it was primarily an agricultural economy in 1971, the composition has changed over the decades, with industry and services now accounting for the lion’s share of economic output. Agriculture’s share of GDP has dropped to just 13%.
The garment industry emerged as one of the nation’s success stories in recent decades. It is the second-largest globally, only surpassed by China, and rakes in over $35 billion a year from exports. The sector employs 4 million people, the majority of whom are women, contributing to female empowerment.
Remittances also play a major role in the economy, with Bangladeshi workers employed abroad transferring nearly $24.7 billion in the fiscal year 2021.
Bangladesh is no longer an economic basket case but rather a model for developing countries. No other countries in the region have made such economic progress in 50 years, including in road, transport, public health and infrastructure development. The improvement in female education has also transformed the socioeconomic structure of the country. With a GDP of over $409 billion (€362 billion), Bangladesh currently has the world’s 37th largest economy and forecasts suggest that the size of the economy could double by 2030.