Conquering the ‘Land of the Long White Cloud’ 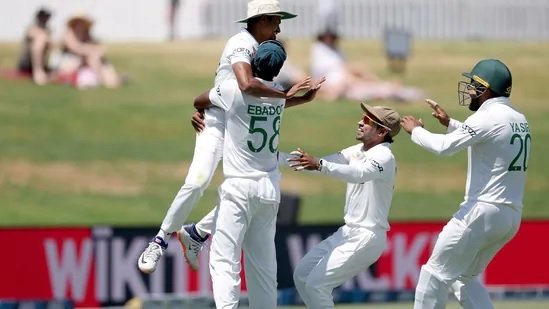 Tigers never won a Test against Kiwis in 21 years. But they had never won a match, across formats, the 32 times they had faced New Zealand on the Kiwis’ home soil. To be more precise, no one gave them a chance against the world champions of Test in this match too. But the Tigers this time dominated a much superior opponent, in their conditions, for all five days. It’s something to cash in on, build on, and not fritter away, reports Press Xpress

Bangladesh began 2022 with a bang. The Tigers not only defeated the World Test Champions New Zealand in their own den but also assured that they wouldn’t come back home empty-handed like the yesteryears. In the 1st Test that began on this New Year ’s Day at the Bay Oval in Mount Maunganui, they crushed the Kiwis by a massive margin of 8 wickets on Day 5 and produced what many called one of the greatest upsets of all time in Test history.
What makes the win more special is that Bangladesh’s tour of New Zealand looked in jeopardy. Health authorities in New Zealand ordered the visitors to spend an additional three days in hotel quarantine after they had spent around a week in their rooms. Bangladesh’s spin-bowling coach Rangana Herath tested positive for Covid-19. Eight Bangladesh players, identified to have come in close contacts with a Covid-positive case in New Zealand-bound flight, were also in isolation. All in all, Bangladeshis were not in a good place.
It is worth mentioning that Bangladesh’s tour to New Zealand was after the 2-0 Test-series defeat at home to Pakistan, where they lost the second Test in Dhaka, despite two-and-a-half days being lost to the weather. That came after the T20 World Cup, where they began with a loss to Scotland in the first round, somehow made it to the main round, and lost all their five group-stage games.
What stood out for Bangladesh was how almost every member of the team turned their form around. As much as Mahmudul Hasan Joy won praise for batting out of his skin for nearly five hours, Shadman Islam, too, batted with more confidence than he showed in the dismal Pakistan series.
Najmul Hossain Shanto, Mominul Haque and Litton Das – all looked like the new leaders of the batting group already. Shanto batted like a proper No. 3 most probably for the second time in the last 12 months. He pushed the scoring, yet remained solid in defence. Mominul batted like the senior pro he is, while Litton took forward his confidence in Tests, and didn’t go the way he has in T20s of late.
Stats reveal that Bangladesh never won a Test against New Zealand in 21 years. They had never won a match, across formats, the 32 times they had faced New Zealand on the Kiwis’ home soil. To be more precise, no one gave them a chance against the world champions of Test cricket this time too. In fairness, they have never even come close to victory in Test matches in New Zealand, even losing in 2017 after posting a huge 595/8.
Before the first Test, Bangladesh had never won a Test in South Africa, England, New Zealand or Australia (SENA). They have enjoyed some good moments in spurts in these nations over the years, but they never sustained it enough to put together a proper challenge. In the first Test against the Kiwis, Bangladesh dominated nearly every session to claim their first ever win in a SENA nation.
Not since Robiul Islam in Zimbabwe in 2013 had a Bangladesh seamer taken a five-wicket haul in a Test match anywhere. Ebadot Hossain, who had the worst average of any bowler in Test history with at least 10 wickets (81.4), ripped through the Black Caps’ line-up in the second innings to finish with 6/46 and set up a famous, historic victory.
New Zealand hadn’t lost a Test at home since South Africa defeated them by eight wickets at the Basin Reserve in March 2017. The Black Caps have been a force at home over the course of the past five years, winning 13 of 17 matches, which included dominant victories over the likes of England and India.
The last Asian team to win a Test in New Zealand was Pakistan back in 2011. They have played five Tests on the trot without tasting success. India last won there back in 2009. They have since played six Tests without the joy of victory. Sri Lanka also haven’t tasted success in six Tests since their last victory in the nation long since 2006.
Before this historic win, Bangladesh had only beaten Zimbabwe (2013, 2021), Sri Lanka (2017) and a weakened West Indies (2009) away from home. So, to beat a near full-strength New Zealand side that was only missing Kane Williamson is quite an achievement. But Bangladesh, too, came to the tour without the services of their ace all-rounder Shakib Al Hasan, experienced Tamim Iqbal and clinically efficient Mahmudullah.
Never before had Bangladesh batted as long away from Asia as they did in their first innings in this Test. They kept the Black Caps out in the field for 176.2 overs, accumulating 458 to take a crucial 130-run lead. The Tigers batted 196 overs against Sri Lanka in Galle in 2013, which remains their longest-ever batting innings.
Bangladesh’s marathon first innings effort was made all the more impressive by the fact that each of their top eight batsmen batted at least 50 deliveries. This was a first for Bangladesh in Test cricket.
For the first time since 2017, New Zealand won’t finish a home Test campaign with a series victory. They won eight straight series in this period, which was crucial in their journey to the World Test Championship trophy. To go one step further, New Zealand have not lost a home series since losing to Australia in 2016. Before that, South Africa won 1-0 in 2012.
The win over New Zealand is at that level in terms of cricketing surprises. The difference is that, Bangladesh this time dominated a much superior opponent, in their conditions, for all five days. It’s the sort of result that changes things. Like at home, with the BCB. The misfiring, one-dimensional team can win overseas, that too with fast bowlers showing the way and their batters taking their game a step higher. It’s something to cash in on, build on, and not fritter away.