FALLING FOREIGN RESERVE: WHAT CAUSES IT? HOW TO EASE PRESSURE? 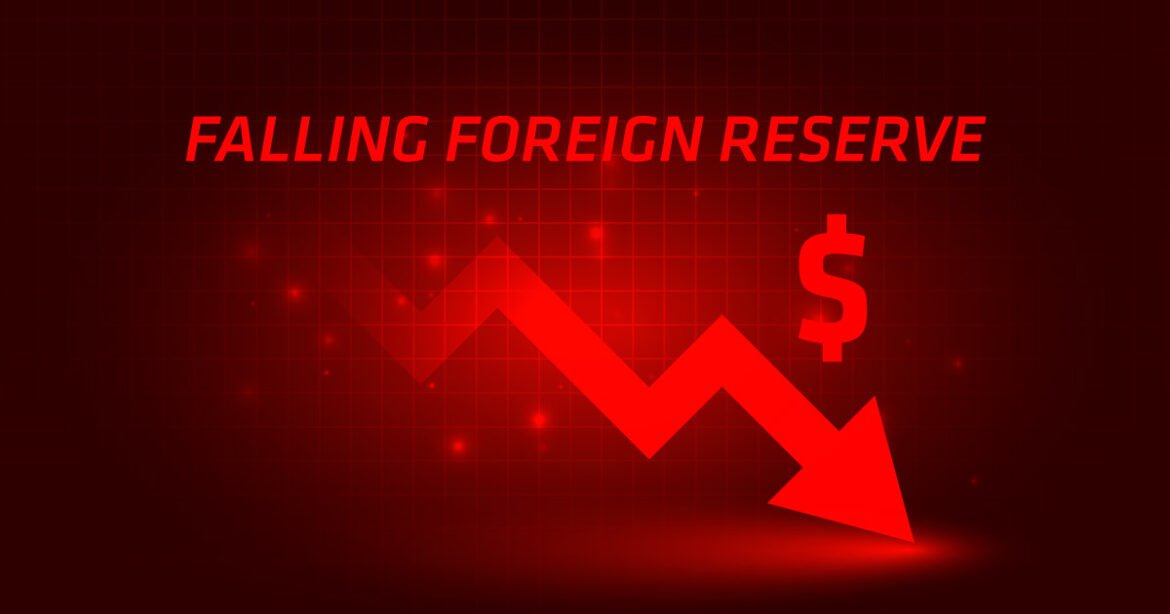 Bangladesh’s foreign currency reserve is plummeting rapidly from its pick since last year. Economists say this is a warning sign of possible disruption in economic activities. Hence, they explore the reasons why the forex reserve is so much under pressure and prescribe the ways to ease pressure on forex reserve, writes MOHAMMAD RAFIUL HASSAN.

YOU CAN ALSO READ: IS GOVT READY TO TACKLE SITUATION ARISING OUT OF FIRST TRULY GLOBAL ENERGY CRISIS?

Despite the Bangladesh Bank’s intense efforts, external sector performance continued to weaken the main foreign currency earning sources widening the trade deficit and increasing pressure on foreign exchange reserves. The trade deficit stood at a record $33.25 billion at the end of the outgoing fiscal year 2021-22. At the same time, the current account deficit also surpassed $18.50 billion. Fuel import bills show no sign of slimming, fertilizers remain pricier and if food prices go up further, foreign reserves will be under more stress.

Economists say that the warning signs were present long before the Russia-Ukraine conflict, particularly after the pandemic. Persistent current account deficits, large trade deficits, and increasing liabilities over foreign assets are nothing new. The reserve pressure was already there and it became more visible because of the war, according to their views. But it is true, while pandemic disrupted the economies of most countries, Bangladesh’s foreign currency reserve was having a good time during that time. Again, the question is: why?

The reserves have been growing steadily for several years due to the slowdown in imports and rising remittance and export earnings even during the pandemic. Some reasons include:

Deferred import bills: During pandemic period imports dropped substantially while remittances rose. In addition, the payment of import bills and loan instalments has been largely postponed resulting in the growth of reserve. Liabilities also grew at the same time. According to a report, in 2018, the foreign currency assets were $8.81 billion while liabilities were $7.72 billion dollars. The assets grew to $14.73 billion the next year and liabilities grew to 13.89 million dollars at the same time. In 2020, as reserves increase, so did assets and liabilities. Assets were $20.09 billion and liabilities were $20.09 billion during that year. In the following year, liabilities stood at $22.76 billion against assets of $24.36 billion. This suggests that the amount of debt has increased more than the foreign currency deposits during this period and the Covid restriction contributed to the increase of the reserve.

Short-term Loan: To meet the deficit, short-term loans in foreign currency have been taken during pandemic and by using loan money, reserves have been artificially inflated with a large share of remittance and export earnings. According to economists and bankers, the increase in reserves caused by hazardous short-term loans was unsustainable, which is why, it was unable to withstand the pressure.

WHY IS RESERVE UNDER PRESSURE?

Economists and central bank officials believe that a confluence of factors is leading to the fall of forex reserve. They believe that the main reason for this fall is the sudden increase in the country’s import cost, decreasing exports and decreasing trend in the flow of remittances.

Increasing Import Expenditure: According to a recent central bank report, expenditure has been increasing more than foreign exchange earnings for the past few years. The foreign exchange payment liabilities have been surging due to increasing oil, gas, and food prices in the global markets. As a result, an additional $2 billion from export earnings and remittance are spent for import in April this year.

Higher dependency on importing oil and LNG gas both directly and indirectly have affected the foreign exchange reserves. Bangladesh Bank officials said that high import payments were one of the main reasons for the depletion of the forex reserve. To clear import payments, the central bank sold $4.1 billion to banks in between July 1 and October 13. Bangladesh Bank has been selling dollars from the reserves in continuation of last fiscal year to bring stability to the forex market. Former Bangladesh Bank governor, Atiur Rahman said that despite the increase in remittance, forex reserve fell due to the continued sale of dollars. Bangladesh Bank spokesperson and Executive Director Serajul Islam said that the demand for dollars in the market has increased due to the abnormal increase in import costs.

Decreasing Export: The country’s exports have also been declining for the past few months. According to the Export Promotion Bureau (EPB), exporters fetched the country $4.35 billion in October, which was a 7.85% low year-on-year. Abdur Razzaq, a trade expert and a former researcher of WTO, said overall exports of Bangladesh have declined by 6.25% in the last month, mainly due to a decline in apparel exports. Bangladesh Garment Manufacturers and Exporters Association (BGMEA) President Faruque Hassan told that due to high inflation and increased bank interest rates in export destination countries, orders had slowed over the last two months, while many are asking to hold shipments which is a worrying situation for the country’s economic sector.

Decreasing Trend in Remittance flow: Despite increasing the cash incentives to 2.5% from 2% in the current fiscal year, inward flow of remittance saw a fall of 25% in September compared to August. In October, remittances declined further in the face of dwindling foreign exchange reserves. Expatriate Bangladeshi sent $1.52 billion home in October, down 7.4% from a year ago and 1% from September this year. According to data from Bangladesh Bank, it was the lowest inflow of remittance in eight months. Though the number of workers going abroad is increasing, the remittance flow is declining because of their preference to send money through informal channels that provide much better exchange rates. The inflow of remittance has been on a downward trend since February that, in fact, posing a threat to the country’s economic stability as a whole.

HOW TO EASE PRESSURE?

The pressure on the reserves is projected to decrease in light of policy steps to restrict imports, an increase in fuel price, and increased exchange-rate flexibility. Ahsan H Mansur, executive director of the Policy Research Institute (PRI) and Chairman of Brac Bank, told “We should try not to decrease further the foreign currency reserve. On the one hand, we must pull the reins of imports; on the other hand, emphasis should be given on increasing remittance and export income”. Former governor of Bangladesh Bank Dr Salehuddin Ahmed said that declining reserves were a major challenge for the economy. “Now we have to think about how to meet this challenge. First, we need to emphasize increasing remittances. Dollar rates should be left to the market,” he said adding that “banks will buy dollars at the required rate. It does not matter whether it is Tk 112 or more. It is important to raise remittance now”. He also said that increasing the flow of inward remittance and curtailing import liabilities were ways to secure forex reserves, as exports were facing a slump due to the Russia-Ukraine war. The former governor suggests that it is important to stop money laundering, and by increasing market supervision, product price should be kept at a reasonable level as much as possible. To increase domestic demand, employment should be created through small industries. Big industries cannot be allowed to go bankrupt and creating alternative export markets is also important.

Speaking to the media, private research organization, South Asian Network on Economic Modeling (SANEM), Selim Raihan said there is a fear over what the state of export will be in Bangladesh because of economic slowdown in Europe. The government has taken many steps to control import in a bid to tackle the situation and that may reduce growth. At present, macroeconomic stability must be emphasised more than GDP growth and the government must take further measures considering the overall situations, he suggests. Meanwhile, the government has taken several steps to tackle the reserve crisis. In the wake of the currency crisis, three recent steps of the government that attracted profuse appreciation are the travel restrictions for government officials, lifting of source declaration requirement for over Tk 5 lakh remittance, and imposition of additional duty on 68 various importable items. The government is also giving stimulus packages for the export-oriented industries. Besides, multi-agency efforts to scale up export and attract FDI has been set in motion. Government is therefore expecting to ease the pressure on the forex reserve soon. Bangladesh Bank Governor Abdur Rauf Talukder therefore said that the dollar market will be normal within two months at most.

To sign off, economists and experts apprehend that the ongoing challenges may continue for many more months, and the scenario remains uncertain for now.

This is reflected through the changes in projections of various international organisations frequently.

Therefore, policy responses of the relevant authorities will have to be prompt and pragmatic. It is now realized that unnecessary imports have to be discouraged and more exports should be promoted.

Export fall may be prevented if the factories are provided with required raw material and energy.

As for remittance, more Bangladeshis have gone abroad this year, and hence a surge in remittance is expected in near future if expatriates find dollar exchange rate satisfactory. Advanced economies are in need of skills and Bangladesh needs to focus more on skills development to benefit from the highpaid job market. In line with the views of experts, it can be said that this is not the time to be obsessed with GDP growth. The policymakers should, instead, focus on strengthening the macro-fundamentals so that the economy is strong enough to navigate through these uncertain and difficult times.