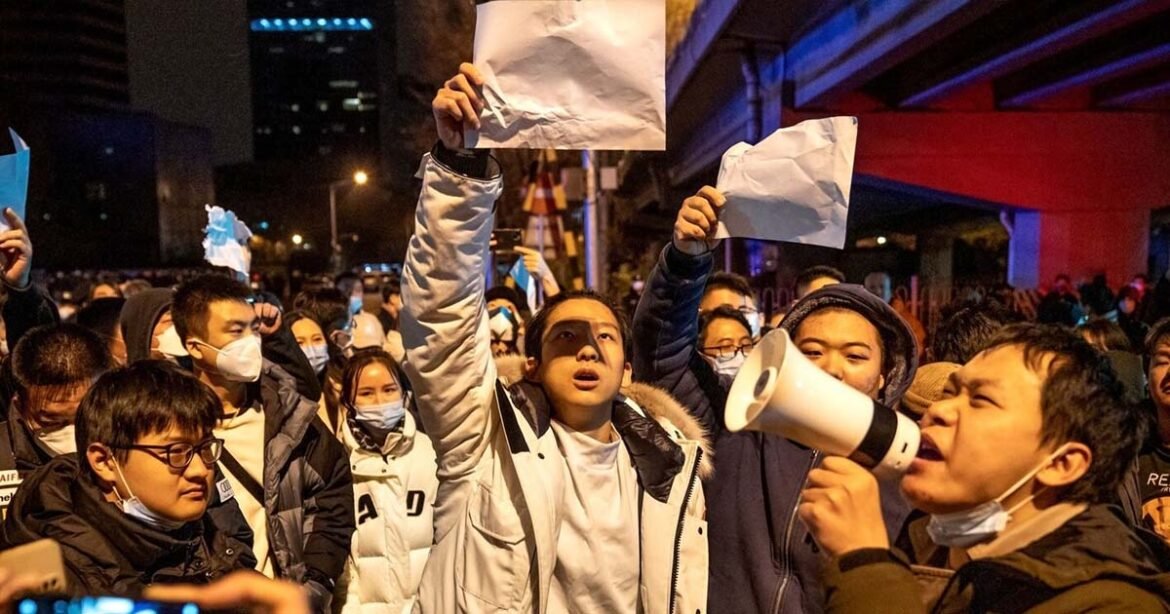 Protests over China’s Covid controls spread across country Protests against China’s strict COVID-19 policies have spread to more cities as anger grows over a deadly fire in the western Xinjiang region which is linked to the country’s strict lockdown policies.

The biggest Chinese towns are now experiencing protests against the country’s harsh COVID regulations. Protesters have converged on both Shanghai (the financial hub of China) and Beijing (China’s capital). A malfunctioning power strip started the fire on the 15th level of an apartment complex in China’s far west (Xinjiang’s capital, Urumqi) on November 24. It took firefighters three hours to put out the fire, which was too long to save at least 10 lives. People suspected that a Covid lockdown had made the rescue process harder. This has turned into a tragedy and a political headache for local leaders.

The widespread anger of public

The killings have generated intense public outrage, and many internet users have suspected that the high-rise building’s tenants were unable to flee in time because it was partially locked down. However, city officials have denied the claims. Many protesters held up blank pieces of paper to express their annoyance and acknowledge the limitations. An online video purportedly of the protest showed people in Shanghai chanting, “Lift lockdown for Urumqi, lift lockdown for Xinjiang, lift lockdown for all of China.”

YOU CAN ALSO READ: ROHINGYA REPATRIATION – A SCENARIO OF INSUFFICIENT INTERNATIONAL EFFORT

At midnight, hundreds of people had gathered on Shanghai’s Wulumqi Road with flowers, candles, and signs that said “Urumqi, November 24, those who died rest in peace.” This act was done to remember the deaths that happened in Urumqi fire.

A large number of students from the Communication University of China in Nanjing held a rally in support of the victims of the Urumqi fire on campus, as seen in internet footage. Most of the images had been deleted by censors by Saturday. However, on the same day, some low-risk areas of Urumqi were opened up. Protests also took place in Chengdu, in the southwest, and in Xi’an, in the center and in Wuhan.

Some protesters, however, have called for the resignation of President Xi Jinping. In China, any open criticism of the Communist Party is subject to severe repercussions. So, it is extremely uncommon for citizens to express their rage at party figures in public.

The outpouring has generated new challenges on Mr. Xi only one month after he gained a third term as party leader, establishing his position as China’s most powerful leader in decades. His “zero Covid” plan, which aims to eradicate infections through lockdowns, quarantines, and mass testing, has drawn more controversy. The zero-Covid strategy is the last one of its kind among the world’s major economies.

It is partly due to China’s low vaccination rates and an effort to protect the elderly. It has kept deaths from coronavirus significantly lower in China than elsewhere. However, it has also brought many Chinese cities to a red light, affected the lives and travels of hundreds of millions, and forced many small enterprises to close.

Snap lockdowns have sparked protests across the nation, while more general Covid restrictions have sparked recent violent demonstrations from Zhengzhou to Guangzhou. Despite the strict efforts, China experienced its highest weekly case count since the pandemic began.

A rare scene for China as crowd chants “XI Jinping, step down”

Videos shared on social media seem to show a large number of Wuhan citizens protesting in the streets, with some demonstrators seen tearing down barricades and shattering metal gates. Witnesses and video recordings claim that even a sizable crowd was heard yelling, “Down with the Chinese Communist Party, down with Xi Jinping, free Urumqi!” This has never happened before.

In China, protests are rather infrequent. The Communist party has mostly eradicated methods of bringing people together to overthrow the government, particularly under Mr. Xi. Independent human rights organizations have been prohibited, dissidents have been put in prison, and social media is heavily controlled. People initiating protests in towns and villages are often workers, farmers, or other locals frustrated about job losses, land disputes, pollution, or other issues that usually don’t get out of control.

However, the pervasiveness of China’s Covid limitations has risen a hostility that crosses class and location. Migrant workers who are locked out for weeks and can’t find work or food, college students who can’t leave campus, and city professionals who can’t leave – all are frustrated for the same lockdown reasons. The latest incident of fire has shaken the country as the citizens now feel that there is no safety for their lives. The “No more lockdowns!” slogan tells the demand of the protests very clearly. Now, the question remains, what measures did the Chinese govt. will take to control the situation?