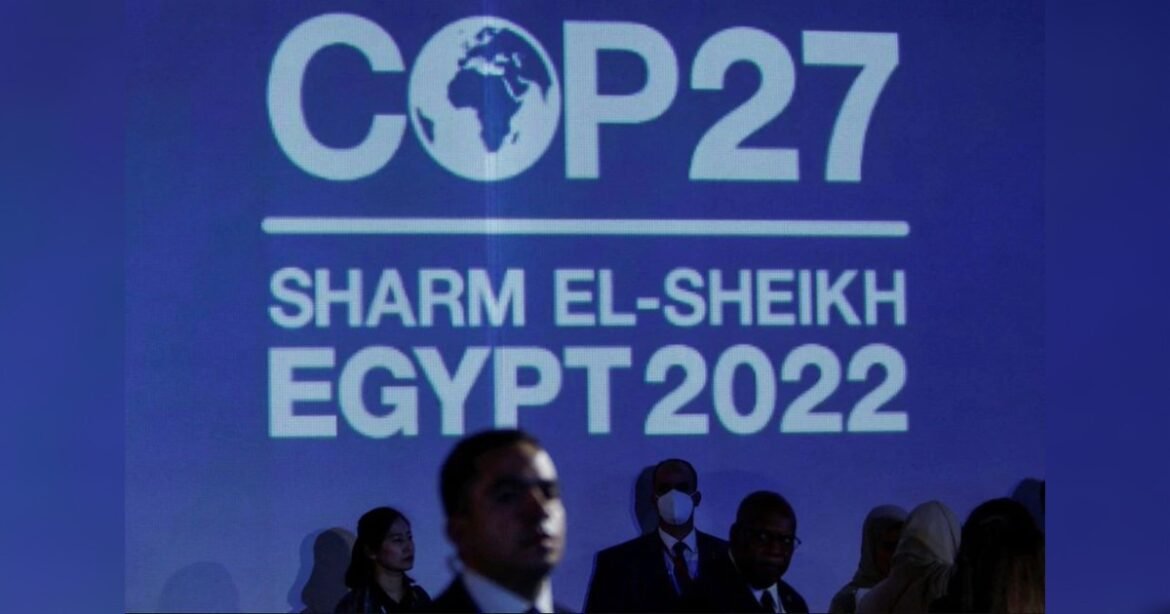 In a year of terrible natural disasters, the 27th Conference of the Parties (COP27) on climate change is trying to live up to its slogan ‘Together for Implementation’ and move forward with previous commitments in frantic bid to limit global warming.

The COP27 began on November 6 in Egypt’s Sharm el-Sheikh and is set to continue till November 18 with goal to strengthen and carry out the promises made at last year’s summit in Scotland. The main focus of this year’s proceedings will be on taking action on climate pledges to reach net-zero emissions, improve the resilience of the most vulnerable, and make sure that financial flows are in line with these goals. One of the key purposes is to keep the rise in global temperature below 1.5 degrees Celsius (2.7 degrees Fahrenheit) to avoid the worst effects of a warming planet.

YOU CAN ALSO READ: INDIA’S SELF-SUFFICIENCY IN DEFENCE PRODUCTION: CAN BANGLADESH BENEFIT?

The UN holds climate negotiations every year, and this year’s meeting in Egypt is being held with participation of about 44,000 people there drawing presence of leaders from different countries. They’ve less than two weeks to talk about as to how greenhouse gas emissions can be significantly reduced and expenses of climate change be covered.

Attended by heads of state and government from nearly 200 countries This time the Sharm el-Sheikh Climate Implementation Summit was held on November 7 and 8.

The talks began on November 7 with alarming statements about calamities brought on by climate change, cries for a reduction in greenhouse gas emissions, and a proposal for a new global early warning system for weather.

“We’re on a highway to climate hell”

Antonio Guterres, secretary-general of the United Nations, was frank in his opening remarks. He said, “We are on a highway to climate hell with our foot on the accelerator.” He also said that the official number of people on Earth is expected to reach 8 billion during this climate meeting. “How will we answer when baby 8-billion is old enough to ask ‘What did you do for our world, and for our planet, when you had the chance?'” Guterres asked the world leaders in the room.

There is a new UN strategy to alert people worldwide to climate-related dangers including catastrophic storms and floods. It is known as “Early Warning for All”. According to the U.N., only about half of the world has access to multi-hazard early warning systems, which gather information on the likelihood of disasters, keep an eye on hazardous weather, and issue emergency alerts.

The developing world, which has been most severely impacted by global warming, has the worst coverage. The new plan calls for $3.1 billion to be spent over the next five years to set up early warning systems in places that don’t already have them. These systems will be put in place first in the poorest and most vulnerable countries and regions. Long-term care for the warning systems will cost more money.

A number of international leaders expressed their annoyance that wealthier nations, such as the United States, are not making enough payments to cover the costs of climate change. Developing nations are arguing in these negotiations aimed at compensation for “loss and damage” or the harm caused by severe storms and rising sea levels. USA is primarily touted to be responsible for global warming due to past greenhouse gas emission records.

However, Barbados Prime Minister Mia Amor Mottley went a step further in her opening remarks before the world leaders. She criticized businesses, especially the oil and gas industries that benefit from fossil fuel-intensive economy. She said that those corporations should help pay for the costs of rising sea levels, stronger hurricanes, heat waves, and droughts around the world, especially in places like her own country that’s very vulnerable to climate change and doesn’t have the money to protect themselves.

The American government is collaborating with the telecom firm AT&T to make the data regarding the country’s upcoming climate dangers freely available. The goal is to assist local officials in better comprehending and preparing for the risks posed by increased extreme weather in their areas.

The Climate Risk and Resilience Portal will first include data on weather variables, including those related to temperature, precipitation, wind, and drought. In the upcoming months, new dangers like wildfire and flooding will be added. According to AT&T Chief Sustainability Officer Charlene Lake, “We want other corporations and communities to recognize where they’re potentially vulnerable to climate change and take efforts to become resilient.”

The Forests and Climate Leaders’ Partnership

More than a dozen nations pledged to cooperate in order to halt and reverse land degradation and deforestation by 2030 and prevent climate change. The Forest and Climate Leaders’ Partnership, which is co-chaired by the United States and Ghana and includes 26 nations plus the European Union, represents more than one-third of the world’s forests. At COP26 in Glasgow last year, more than 140 nations decided to protect forests and other ecosystems. Though the U.N. argued on November 7 that the forests’ ability to trap and store carbon is not being adequately protected. The Forest and Climate Leaders’ Partnership said it will convene annual meetings and release progress reports to promote accountability.UK launches partnership to arrest forest loss. The Forests and Climate Leaders’ Partnership will be co-chaired by the US and Ghana. It is a voluntary alliance of the European Union, 26 nations, and a third of the world’s forests. According to a press statement, the UK would pledge 90 million pounds for conservation in the Congo Basin and guarantee 65 million pounds for the Nature, People and Climate Investment Fund, which supports local and indigenous forest communities.

Highlights from Day 2 of the summit

The third day of the 27th Conference of Parties (COP27) in Sharm El-Sheikh and day two of debates and negotiations on the climate catastrophe and potential solutions were both observed on November 8. There were also a number of roundtable discussions, high-level events, and side activities. Heads of the states and the governments kept giving their national statements during the first part of the high-level segment. The leaders of various nations addressed the stage to discuss as to how the effects of climate change are harming their economies, killing, and wounding their inhabitants. How humanity can adapt to a hotter planet has drawn the attention of scientists. Additionally, the UN made an effort to penalise businesses that exaggerate the amount of greenhouse gas emissions they are decreasing.

Fossil fuels and ‘loss and damage’

A global tax on the profits of fossil fuel firms was demanded by some small island states. The topic of “loss and damage” or the economic and other effects of climate change was brought up informally. In addition, the leaders of various countries pledged money to address “loss and damage” in underdeveloped nations. Scotland’s First Minister Nicola Sturgeon declared that her nation would send £5 million, while Austria promised to provide $50 million to the underdeveloped nations. Germany and Belgium had previously agreed to provide money on Monday to cover “loss and damage.” Also, a NZD 20 million pledge was made by New Zealand. However, uncertainty lingers. The NGO Climate Action Network New Zealand said, “Critically, however, the funds New Zealand has announced are merely a re-allocation of a portion of the $1.3 billion in climate finance the government already announced late last year.”

The Sharm El-Sheikh Adaptation Agenda was introduced by COP27 President Sameh Shoukry at the Global Climate Action High Level Event that was held as part of the Sharm el-Sheikh Implementation Summit. According to the UN, the agenda intends to mobilize global action around 30 adaptation outcomes that are required to close the adaptation gap and create a resilient world by 2030. These outcomes include having smart and early warning systems in place. The Yearbook of Global Climate Action 2022, published by the Marrakech Partnership for Global Climate Action, examines the status and scope of global climate action in 2022 and seeks to improve collaboration between governments and stakeholders to reduce emissions and boost resilience against climate impacts. Other Global Climate Action events over the next days will concentrate on money, resilience, business, land use, water, energy, and transportation.

The High-Level Expert Group published its report on businesses, financial institutions, cities, and regions’ commitments to net-zero energy. The Expert Group was made up of 17 independent specialists from different parts of the world. Their study emphasized how inadequate net zero pledges and greenwashing pose a danger to international efforts. By setting precise rules and criteria, it offered ten doable ideas on how to improve net zero’s integrity, transparency, and accountability. Another report published on November 9 and commissioned by the current and previous hosts of the climate summit Egypt and Britain, stated that a new roadmap on climate finance is required to mobilize the $1 trillion in outside funding that will be required by 2030 for emerging markets and developing nations other than China. The amount now invested is only close to $500 million.

An alliance for wind energy and mangroves

The Global Offshore Wind Alliance (GOWA) was established on November 8 by the Global Wind Energy Council, Denmark, and the International Renewable Energy Agency (IRENA). By 2030, the GOWA hopes to contribute to a minimum 380 GW worldwide offshore wind power. Just 60 GW of offshore wind power is available at the moment. Nine more nations have joined the Global Offshore Wind Alliance during COP27: Belgium, Colombia, Germany, Ireland, Japan, the Netherlands, Norway, UK, and United States. Meanwhile, the Mangrove Alliance for Climate was established by the United Arab Emirates and Indonesia at a side event held in the UAE pavilion (MAC). The partnership promises to work on enhancing the number of mangroves on earth. An international mangrove research center, with a focus on investigating, preserving, and restoring mangrove systems, carbon sequestration, and other topics, will be established in Indonesia as part of MAC by Indonesia and the UAE. The founding members of this alliance are Japan, Sri Lanka, Australia, Spain, and India.