SUSTAINABLE WASTE MANAGEMENT: ARE WE DOING ENOUGH IN DHAKA? 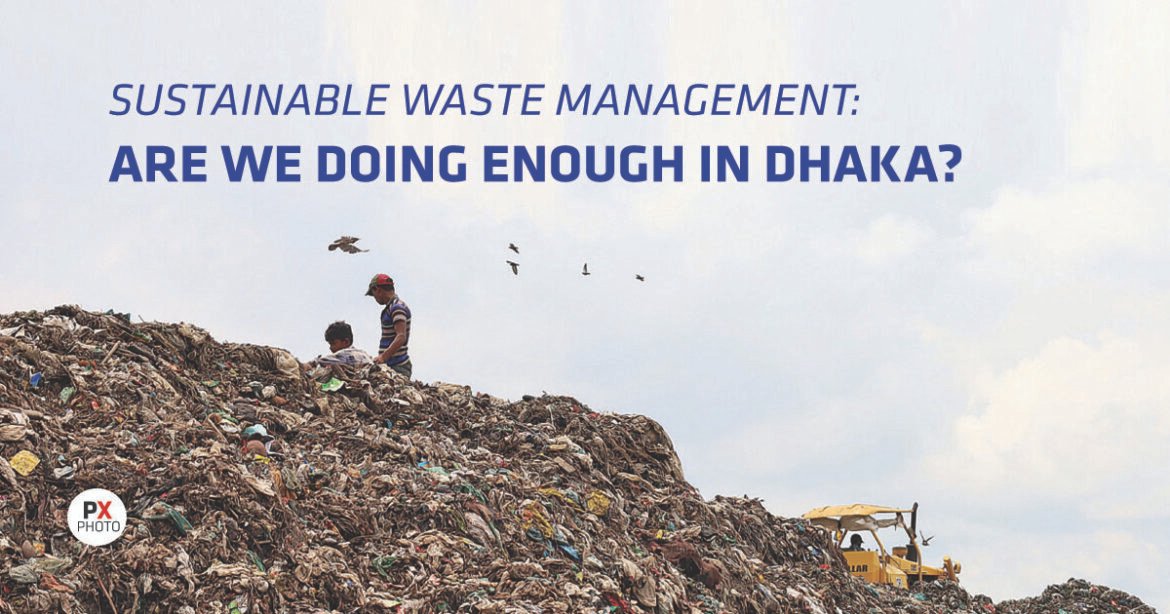 The city of Dhaka is one of the biggest producers of waste in the country. Dhaka City Corporation is responsible for its management. Though the city authorities are doing their best to sustainably manage the waste, there is a lot to do with it. Mohammad Rafiul Hassan sketches the city’s current waste generation, characteristics, associated environmental impact, and management scenario along with the challenges of and ways forward for the sustainable waste management system.

Bangladesh being among the fastest urbanising economies in South Asia has been going through a rapid growth of waste generation in recent times. In countries like Bangladesh, a massive volume of wastes is generated every day in the city areas – especially in Dhaka. It has been reported that waste volumes got doubled every 15 years and an average of 40% of wastes remain uncollected in urban areas. The ever-increasing hazardous medical and e-wastes add further burden to the city’s waste management system.

ALSO, YOU CAN READ: GLOBAL FOOD SECURITY UPDATE: WHERE DOES BANGLADESH STAND?

If we think about the environment, waste disposal poses a greater problem for it. Waste disposal leads to land pollution if openly dumped, air pollution if burnt and water pollution if dumped in low lands. Dhaka, the capital city of Bangladesh, is facing serious environmental degradation and public-health risk due to uncollected disposal of waste. When waste is dumped indiscriminately on streets and other public areas, it clogs drainage system and contaminates water resources. In the last decade, however, importance of community involvement in waste management and uses of adapted technologies were recognized for improving the waste management system. It has also been observed that waste can be another source of earning money by sustainably managing it. Although municipal authorities acknowledge the importance of adequate waste collection and disposal as well as resource recovery and recycling, it is mostly beyond their resource to deal effectively with growing amount of waste generated by the expanding city. At this moment it is therefore very much needed to make a proper plan for waste collection and disposal system for the capital.

Of the urban centres in Bangladesh, Dhaka has grown rapidly with a population of nearly 22 million, which accounts for 12% of the country’s population and 38% of the country’s urban population which generates approximately 1.65 million metric tons of waste annually. Approximately 7,000 tons of waste is produced daily in Dhaka, which is projected to increase to 8,500 tons by 2032. Daily per capita waste is 0.513 Kg in Dhaka North and 0.56 kg in Dhaka South. The waste stream contains more than 80% organic matter and comprises a variety of substances such as food waste, paper, cloth, agricultural waste, construction debris, metals, medical waste, and appliances.

Primarily The DCC is liable of collecting and managing waste in Dhaka. Households put their non-segregated waste into little containers and wastes are then collected in vans by DCC’s delegated organizations to the secondary collection points. Waste trucks then carry the wastes to the landfill sites. In the DNCC, it is estimated that only 40-60% of waste is collected. Regarding the waste collection, Government services are minimal in the slum areas where half of the city’s poor live. Nonetheless, government’s Solid Waste Master Plan 2005 offers as system to collect waste from household regularly from a network of collection bins throughout the city.

Before being transported to the city’s landfills or dumped in the open areas, only a small portion of city’s organic waste is diverted to be used as compost. A few composting companies are working in the city for processing around 100 metric tons of waste per day to make compost and to sell it to the local farmers. Dhaka has preliminary plans to develop a larger Integrated Resource Recovery Centre at one of the city’s landfills to process waste into compost and to generate electricity using landfill gas.

Dhaka has historically relied on the informal recycling sector (e.g., waste pickers, of whom there are an estimated 120,000) for the recovery of non-organic materials. In an effort to recover more recyclable materials, the city launched a source separation pilot programme in 2012.

Around six thousand mini bins were installed at different points of Dhaka in earlier 2016. The bins were installed for pedestrians so that they can put light garbage into these bins. But most pedestrians do not use the bins as was expected. In 2005, Japan International Cooperation Agency (JICA) undertook an initiative to develop capabilities and management skills of DCC with the objective of formulating a master plan of Dhaka City. Department of Environment (DoE), Ministry of Environment and Forestry of the Government undertook another initiative in 2010 with 3R strategy the principle of reducing, reusing, and recycling of resources and products. Towards sustainable waste management, 3R strategy played an important role protecting environment from greenhouse gas emission and convert waste into invaluable resources. Construction of Secondary Transfer Stations (STS) in Dhaka has been a noticeable development in waste management. Construction a number of STS in DCC has enabled it to remove great number of waste containers from the roads. Dhaka North and South City Corporation has introduced a modern waste management system with the support of Japan International Cooperation Agency (JICA) in a bid to dispose of more waste in a smaller landfill under the New Clean Dhaka Master Plan 2018-2032 which is at approval stage.

WHAT IS SUSTAINABLE WASTE MANAGEMENT

Traditionally, dumping waste in the landfills is considered the eventual solution to waste management. But landfills presents a great risk due to the production of harmful gases like carbon dioxide and methane. Realizing its negative externalities, sustainable waste management can be an acceptable solution that we canthink of today. To solve the existing problems, we can focus on the followings:

Waste Concern, an NGO dedicated for waste management in the city, says, if recyclable materials including organic waste for composting are separated, the total waste can be reduced up to 60-70%. Segregation of waste is necessary for the waste to be re-used, recycled and converted into compost.

Dust containers are usually located on streets. When wastes are overflowed, they fall on the street and cause environmental pollution. It hampers people’s movement and creates traffic jam. Underground dust containers can be a good solution to this problem. It can save the space and the related hazards.

A large amount of organic waste, which is left behind after the re-cyclable items are collected by waste picker, from which a huge amount of organic fertilizer can be generated. A survey in Dhaka and surrounding areas which says that 94% of the farmers are willing to buy the compost. Various types of composting methods can be used to generate organic manure from municipal solid waste.

Various technologies can be utilized for energy conversion from waste. Landfills are a significant source of greenhouse gas emissions and methane that can be captured and utilized as an energy source. Capturing landfill gas is not only beneficial for the environment as it helps mitigate climate change, but also for the energy sector and the community. As for the many economic benefits, by diverting waste from landfill sites, the city can save a substantial municipality expenditure on transport costs, extend the life of existing landfills, reduce government spending on chemical fertilizer subsidies and improve the yield of crops. It also reduces the harmful environmental impact of landfill sites, because organic waste is responsible for groundwater contamination and methane gas emissions. By turning the organic waste into compost, the soil in urban areas can be improved. The scope of social benefits includes the generation of green jobs for low-income groups improved living conditions, and improved community understanding of critical environmental issues.

THE WAY FORWARD TOWARDS SUSTAINABLE MANAGEGEMENT

The foregoing discussion shows that the situation of waste management in Bangladesh, particularly in Dhaka city, is becoming an alarming concern which requires immediate attention and sustainable solutions. To address this issue, the following areas of interventions are needed:

A comprehensive set of regulatory guidelines need to be developed for managing all types of wastes generated in cities, including municipal, medical and e-waste. Such guidelines have to deal with waste collection, segregation, transportation and disposal at various stages with proper safety measures. In addition, these guidelines should also include the provision of life insurance for waste workers, subsidies to green recycled products, fines for violating waste management norms and extended responsibilities for producers and consumers of electronic items.

Ward-level primary waste collection needs to be strengthened with greater community participation, while secondary transfer and final disposal should be done by city corporations with increased human and technological efficiency. It is also necessary to create a community of practice and partnerships between relevant government and private entities so that everyone can benefit from a sustainable waste management system.

Recyclable, kitchen, and medical wastes should be stored, disposed of, and transported in different coloured bags or bins. An estimated 20–30% of the waste volume can be reduced for landfill disposal if waste segregation is done successfully. Landfill management should be developed based on sanitary norms, long-term strategy as well as better equipment and human resources.

Behavioural changes of waste generators and collectors regarding consequences of mixed storage and collection, random disposal, and management difficulties should be targeted through the simultaneous implementation of legal, economic, and persuasive instruments. Mass awareness campaigns can be promoted through a joint partnership between city authorities and NGOs.

Recycling saves energy, keeps materials out of landfills, and provides raw materials for new products. Different type of bins can be put for collecting recyclables like paper, glass, plastics, etc. Where possible, reuse some products like plastic bottle instead of throwing them away.

Plastic comprised of a huge amount of waste which is detrimental for environment. Alternative of plastic bags and bottles needs to be used. Economically viable polyethene alternatives also need to be provided to people. Biodegradable plastic, though expensive, should be made available for common people. Bags made of jute can be a good substitute for plastic bags.

To conclude, waste management is the most important function and takes up the major portion of resources of the city corporations in Dhaka. Still the problems of the waste management are caused by some inappropriate planning, policies and managerial procedures. People’s attitudes and behavior are too the major problem in managing waste. A whole culture of waste management need to be put in place – from household to nation. Waste management should therefore be dealt through a holistic approach entailing environmental and climate change, health risks, urban liveability and economic concerns. It is only through a collective and coordinated approach that city of Dhaka will become safe, liveable and resourceful. Turning the waste into resources or energy power and the practice of scientific and hygienic management of waste could ensure a safer life of people and at the same time ensure a sustainable healthy atmosphere for our future generation.