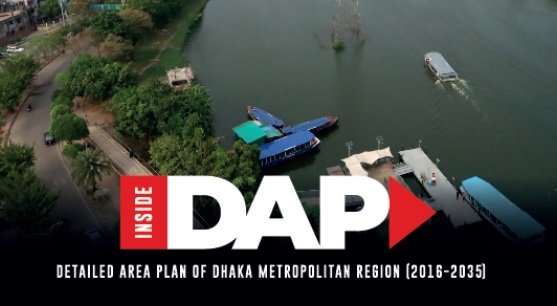 Published today (on August 23), the gazette carrying the new twenty-year detailed development plan is expected to largely expedite the tempo of development in the country’s largest metropolitan area.

Earlier, the government aimed to chalk out a detailed planning with a view to improvising Dhaka as a megacity. For this, the country’s foremost urban planners, architects, policymakers, engineers and adhering professionals and organisations were taken on board with state-of-the-art technology. This mega planning project, called Master Plan under the Ministry of Local Government and Rural Development (LGRD), is known as DAP.

ALSO YOU CAN READ: LIVEABILITY OF DHAKA: IS DAP A SOLUTION?

However, the DAP: 2016-2035 is a local-level planning document, used as the basis for policymaking in land-use zoning, spatial planning, infrastructural development, civic amenities, utility services, and associated issues of the Dhaka metropolis in the long run.

In addition, the new DAP will act as a guide to future planning strategies, development projects, cityscape, climate & greenery and overall demographics.

On the heels of the Dhaka Structure Plan (1995-2015) of the Rajdhani Unnayan Kartripakkha (RAJUK), DAP is a 20-year master plan aimed at improving overall lifestyle quality of urban dwellers, development pattern, through Urban Development Indicators.