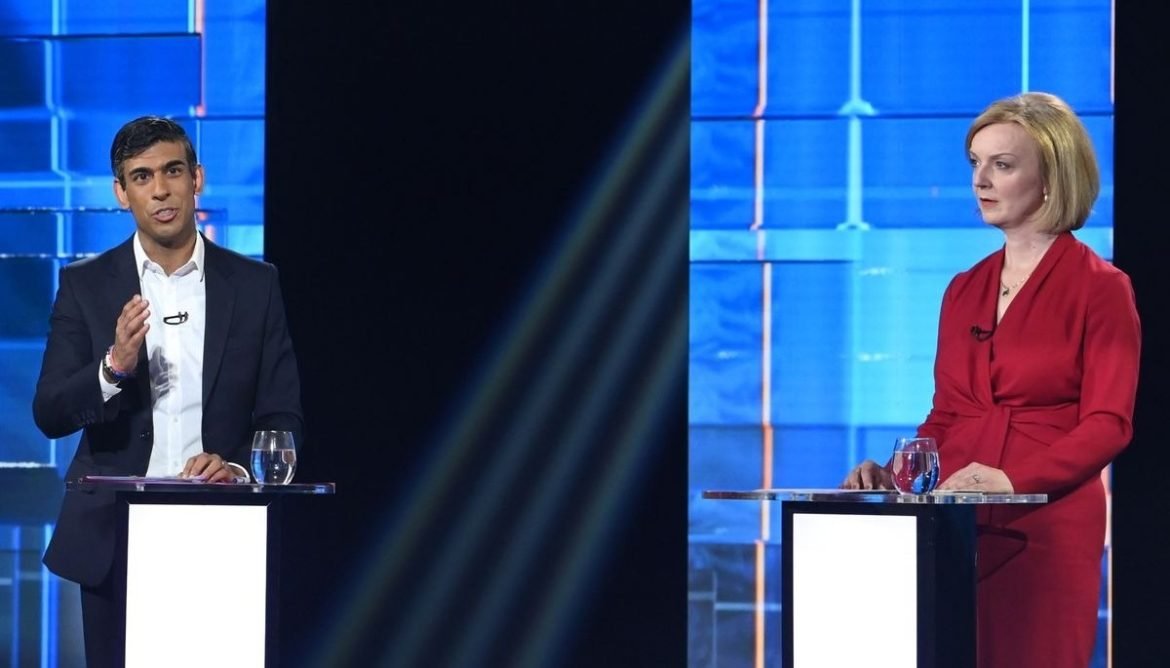 United Kingdom’s Prime Minister Boris Johnson decided to step down from the premiership and ruling conservative party leader post on July 7th after a political hailstorm. The process of choosing the next leader of the party and thus the next prime minister of the UK started the next day. After July 20, 2022, only two competitors remain in the contest to become the upcoming Prime Minister of the United Kingdom. The race has come down to Liz Truss and Rishi Sunak at this point. Sunak won the election with 137 votes against Truss’s 113 in the final vote amongst the conservative party MPs. The final two contestants are now aspiring to become the future prime minister of the United Kingdom squared off in a televised debates over the position of the economy and each other’s tax and spending ideas.

YOU CAN ALSO READ : THE WAYS FORWARD FOR UK’S RULING CONSERVATIVE PARTY LEADERSHIP AS HUSTINGS BEGIN

At present, Truss and Sunak are campaigning for votes among the local party branches. Voting ballots were distributed to conservative party members on August 5; candidates are given six weeks to win the endorsement of their party starting from August. The 180,000 members will have until 5 p.m. on the 2nd of September to cast their ballots, and the results will be published on the 5th of September.

25th July’s primetime discussion between foreign secretary Liz Truss and former finance minister Rishi Sunak marked the beginning of a critical 12-day period comprising three such live TV debates and four husting events for Conservative party members. In the first debate, the candidates for Prime Minister of the United Kingdom, Rishi Sunak and Liz Truss, debated the nation’s economy. Truss stated that insisting on harmonizing the budget of the government would push the economy into a decline. Truss declared, “Crashing the economy to pay a debt back quicker would be a massive mistake”. As Sunak portrayed the traditional Conservative fiscal hawk and Truss pitched a continuation of Johnson’s big-spending mentality, their argument on 25th July highlighted differences within the British ruling party regarding the best approach to handle the economy.

A survey of 1,032 voters done by the market research company Survation showed that 39% of the British public thought Sunak did the best during the discussion, while 38% thought Truss did.

In the last head-to-head television discussion, Rishi Sunak effectively won over Liz Truss in the campaign to select the next Tory party leader and British prime minister. During the evening Sky News discussion, Sunak said Truss’ economic plan will harm the nation, stating that adding “fuel to the fire” will produce “misery for millions” after the incumbent Foreign Secretary argued her tax cuts might avert the Bank of England-predicted recession.

The former finance minister remained to his main point and highlighted that before lowering taxes, there was a need to reduce the swiftly increasing cost of living. “But it all starts with not making the situation worse. Because if we just put fuel on the fire of this inflation spiral, all of us, all of you, are just going to end up with higher mortgage rates, savings and pensions that are eaten away, and misery for millions, he explained. It happened shortly after the Bank of England raised interest rates and issued a recession warning. In contrast to her opponent’s caution, Truss argued that a recession is “not inevitable” and pledged to take “bold” measures. However, Sunak rejected claims that the recession is being brought on by high taxes, saying: “That’s simply wrong. What’s causing the recession is inflation.”

Who is Liz Truss?

Who is Rishi Sunak?

Rishi Sunak served as chancellor in the past and was responsible for overseeing the finances and budgets of the Parliament. Sunak holds a Centralist position and claims that if he does not win, the nation faces a threat of degradation. He will become the first South Asian leader of the United Kingdom if elected. Sunak launched the furlough program during his tenure. During COVID-19, this scheme aided in the payment of wages to millions of unemployed people. Sunken promoted low taxes and pledged to rein in the inflationary trends in his promotions.