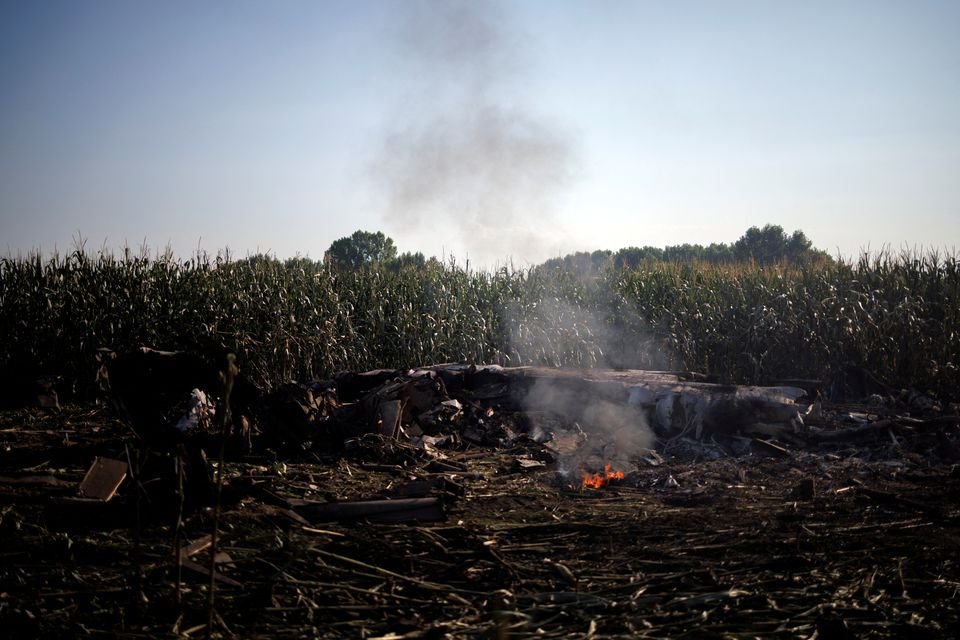 A cargo plane that crashed in northern Greece late Saturday was carrying weapons supplied by a Serbian company for Bangladesh military, informed Defense Minister of Serbia Nebojsa Stefanovic on Sunday.

He also blasted the ‘inaccurate reports’ claiming that the plane was transporting a military cargo to Ukraine, reports Russian news agency TASS from Belgrade. “The fake reports saying the plane was carrying Serbian weapons to Ukraine are absolutely inaccurate and malicious.”

German media giant DW in a report has, however, confirmed that the plane was an Antonov An-12 aircraft — a Soviet-built, four-engine turboprop aircraft — owned by a Ukrainian company.

The plane had reportedly requested clearance for an emergency landing at nearby Kavala airport but did not manage to reach it. Serbia’s defense minister Nebojsa Stefanovic said all eight crew members had died on board.

The cargo aircraft crashed near Palaiochori Kavalas in northern Greece late Saturday. The plane operated by Ukraine-based airline Meridian was travelling from Nis in Serbia and on to Bangladesh via Jordan.

The pilot had reportedly requested clearance to make an emergency landing at nearby Kavala airport due to an engine problem but did not manage to reach it. Communication with the plane ceased almost immediately afterward.
The aircraft was already in flames before it crashed, people close to the crash site told local media.

The mayor of the affected community of Pangeo, Filippos Anastasiadis, said that the plane had been carrying “dangerous material,” likely ammunition.

Britain-based Daily Mail said the Ukrainian cargo plane which crashed in fireball explosion in Greece was carrying 11 TONS of weapons including mortar shells to Bangladesh.

According to the report, a Ukrainian cargo plane which crashed in northern Greece last night was carrying nearly a dozen tons of mortar shells to the Bangladeshi army.

He also specified that the plane was owned by a Ukrainian airliner named Meridian, the seller was a private Serbian company and the buyer was Bangladesh’s Defence Ministry.

Additionally, the Serbian minister confirmed that the flight destined to Dhaka had “all the necessary licenses under all global norms.”

Explosions at the crash site
The DW report said the aircraft was carrying mines and around 11 metric tons of weapons to Bangladesh, which had bought the arms. Serbia’s defense minister Nebojsa Stefanovic said the cargo included illuminating mortar shells and training shells. It had taken off mid-evening local time from Nis.
Stefanovic said the crew, who were all Ukrainian, were all killed.
The plane crashed on farmland close to two villages that are part of the Paggaio municipality.
The fire service said in a statement that it has cordoned off the crash site.
Local officials said 15 firefighters and seven fire engines were initially deployed to the area. Firefighters faced difficulty approaching the site because of the ongoing explosions, officials said.

Was the cargo carrying dangerous material?
Specialists and experts were sent to the crash site to determine whether any dangerous chemicals or explosive cargo remains.
Nearby residents were told to keep their windows shut all night, not to leave their homes and to wear masks. Authorities said they did not know if there were dangerous chemicals — including those contained in batteries — on the plane.

A specialist Greek military army unit that looks for nuclear, biological and chemical substances was expected to comb the site. The fire service has cordoned the area off at a radius of about 400 meters around the crash site.