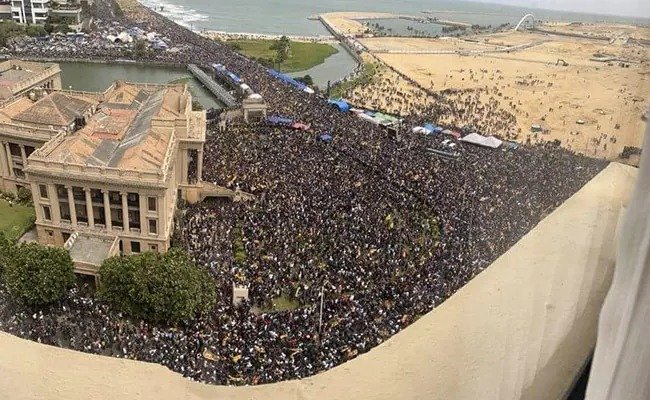 Early on Saturday morning Sri Lankan protestors stormed into their President’s official residence demanding resignation amid months long economic and fuel crisis. Later in the afternoon they forced into the official residence of Prime Minister Ranil Wickremesinghe who agreed to resignation demand to make way for an all-party government. But there are no words from President Gotabaya Rajapaksa’s office.

It is not clear to know the whereabouts of the President or whether he was present at his residence at the time of the incident. Protestors ignored warning shots from the security officials and overran to storm through the gates. According to BBC and AFP, defense officials say he was whisked away before crowds entered his residence. “The president was escorted to safety. He is still the president; he is being protected by a military unit.” an unnamed senior defense official told.

Videos and photos of people roaming inside and outside of the Presidential residence is going viral in the social media. There is even a video where people have jumped into the swimming pool to cool off. There is also another video where a Buddhist monk is seen to jump over security officials trying to break off a cordon.

Sri Lanka has been gripped with a economic crisis where they have ran out of their foreign reserve, making them unable to even import essential supplies such as fuel. On June 28th, in a desperate effort stopped supply fuel to non-essential services. Government’s attempt to borrow money from IMF, China, India and buy fuel from Russia in credit seems to be all failed.

President Gotabaya Rajapaksa’s family is often cited as being the catalyst of such economic crisis by majority of the protestors. The Rajapaksa family members made up a large majority of top cabinet positions running up to the crisis. President’s brother Mahinda Rajapaksa, the family patriarch, was forced to resign from his Prime Minister’s tenure on the month of May, this year.

India and Bangladesh: The Anchor and Trailblazer of South Asian Political Dynamics