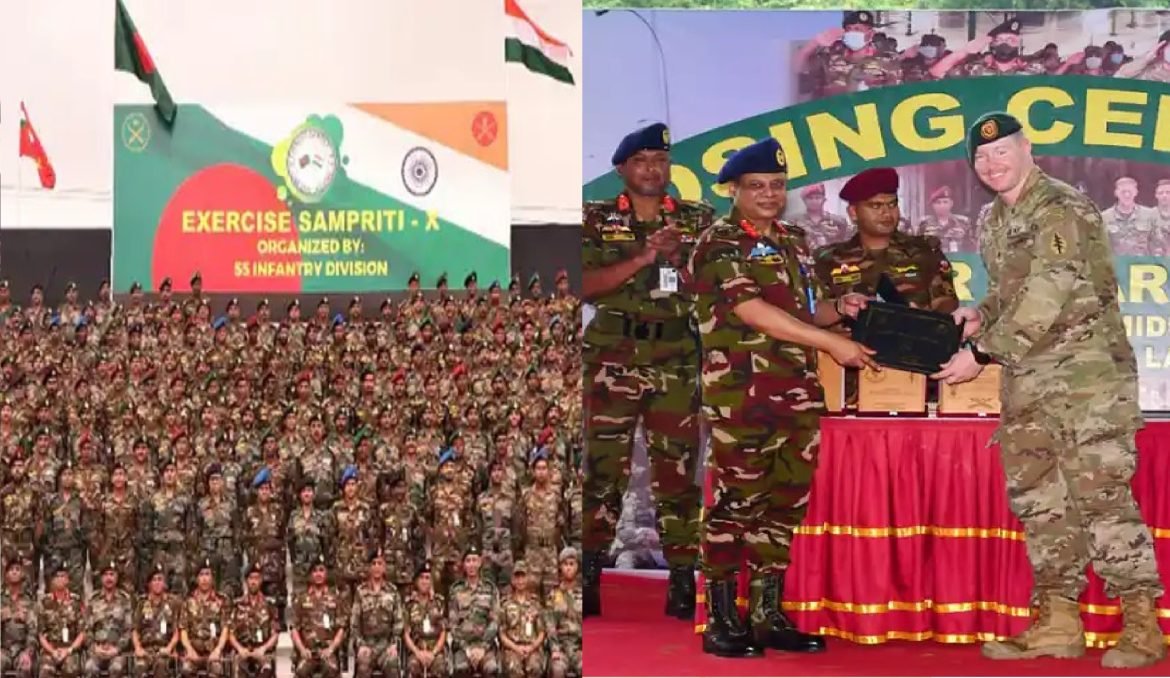 Bangladesh’s strategic and security ties with partner countries like the United States of America, India and China, among others, have been growing steadily. As a mark of this growing relation, Bangladesh security forces in recent weeks had two joint training exercises named ‘Sampriti-10’ and ‘Tiger Shark-39’ with their counterparts from India and USA respectively.

The concluding ceremony of the joint training ‘Exercise Sampriti-10’, with the Bangladesh Army and Indian Army participating, was held at Jashore Cantonment on June 16. Chief of General Staff (CGS) of the Bangladesh Army Lieutenant General Ataul Hakim Sarwar Hasan announced the successful completion of the exercise as the chief guest.

Confirming that the training exercise was over, the Inter-Services Public Relations (ISPR) in a statement said Major General Praveen Charbra, General Officer Commanding, 20th Mountain Division, Indian Army, was present on the occasion as special guest. They also distributed certificates among the participants of the joint training exercise.

Also present was the General Officer Commanding of the 55th Infantry Division, Major General Nurul Anwar. Besides, senior Army officers from India and Bangladesh, JCOs and other ranks were also present. The ISPR statement said that Bangladesh and India have been conducting such joint training exercises since 2010.

Members of the Bangladesh and Indian armies through this latest training exercise conducted joint operations on counter-terrorism operations, humanitarian assistance, disaster management and protection of civilians at the United Nations. The exercise, which began on June 5, was attended by more than 150 officers, JCOs and other military personnel from both the countries.

Meanwhile, another joint training exercise of the Bangladesh and US forces named ‘Tiger Shark-39’ ended on the same day at Jalalabad Cantonment in Sylhet. General Officer Commanding (GOC) and Area Commander (Sylhet) Major General Hamidul Haque was the chief guest at the closing ceremony. US Embassy Deputy Chief of Mission Helen Grace Lafayette was also in attendance.

This joint training exercise from May 25 to June 16 was conducted by members of the Bangladesh Army’s Para Commando Force, the Navy’s Special Warfare Diving and Salvage (SWADS) and the US Special Forces. The main objective of this joint training exercise was to exchange detailed information about counter-terrorism operations, close quarter battles, firing experience and specialised knowledge.

The closing ceremony of Tiger Shark-39 was attended by the Army’s School of Infantry and Tactics Commandant Major General Chowdhury Mohammad Azizul Haque Hazari, senior officers of the Army Headquarters, Bangladesh Navy and the US Embassy as well as senior military officers serving in Sylhet area and various ranks of Army personnel.

Chief of Army Staff General SM Shafiuddin Ahmed thanked the Chiefs of Army Staff of India and the United States of America for the successful completion of the two joint exercises and for the participation of the concerned Army members. He also gave special thanks to all the participating members and organisers for the successful completion of Sampriti-10 and Tiger Shark-39. He hoped such training will strengthen the Bangladesh Army’s relationship with the Indian and the US armies as well as enhance the level of professional communication.