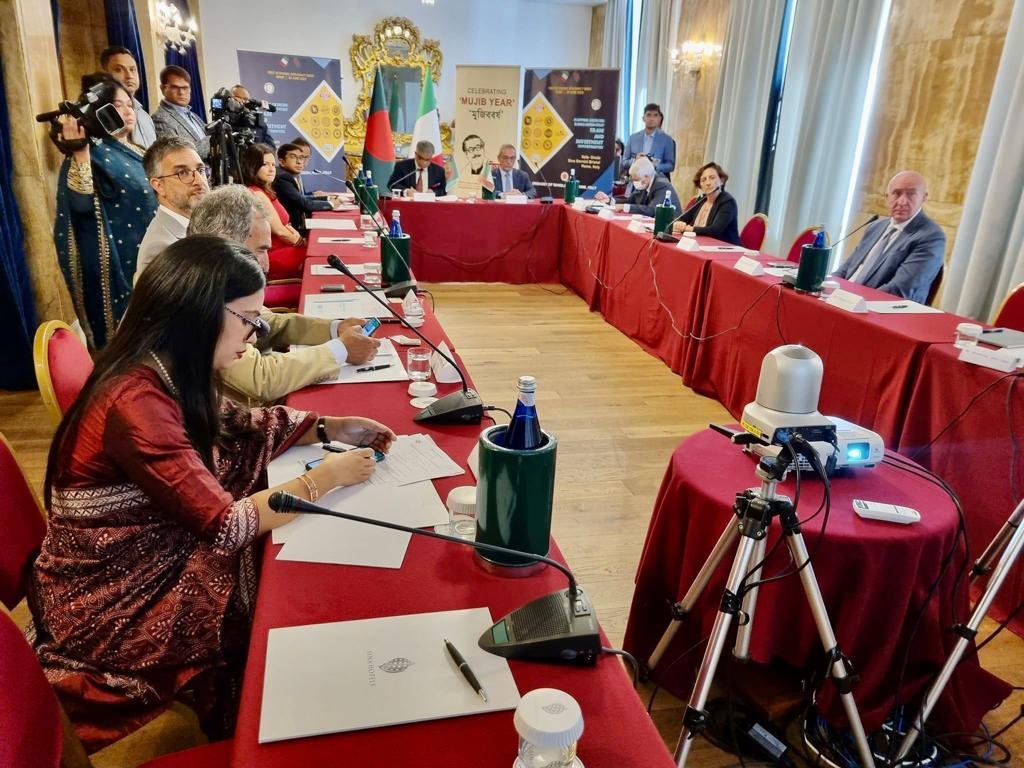 The Bangladesh embassy in Rome has organised a discussion meeting entitled “Mapping Exercise: Bangladesh-Italy Trade and Investment Opportunities” at a local hotel in Rome as a part of the first Economic Diplomacy Week initiated by the Ministry of Foreign Affairs (MoFA), Dhaka.

In his welcome remarks, Md. Shameem Ahsan, Bangladesh Ambassador to Italy, Montenegro and Serbia, paid deep tributes to the Father of the Nation Bangabandhu Sheikh Mujibur Rahman who dreamt of “Sonar Bangla” (Golden Bengal). The Ambassador said Prime Minister Sheikh Hasina is carrying the mantle of Bangabandhu to materialize his dream. In this regard, he shared the happy moment of the opening of the Padma Multipurpose Bridge by the PM which was fully funded by the country’s own resources.

Appreciating the huge interest shown by Italian and Bangladeshi stakeholders at the maiden initiative of the embassy on 30 June 2022, aimed at attracting foreign investment and promoting bilateral trade, Bangladesh Ambassador underscored the importance of exploring the huge untapped potentials to inject dynamism in the existing cordial bilateral relations. Citing the ongoing celebration of the golden jubilee of establishment of diplomatic ties between the two friendly countries, he urged the Italian investors and business leaders to invest in Bangladesh in a big way.

Ambassador Shabbir Ahmad Chowdhury, Secretary (West), Ministry of Foreign Affairs, Dhaka, identified economic emancipation of the common people as the core objective of the war of liberation of Bangladesh and underscored strengthening economic and trade relations between the two friendly countries.

Concerned Directors General at the MoFA and EPB, Dhaka, Presidents of FBCCI, BGMEA, BASIS, LFMEAB and Apex Footwear and representatives from Walton, E-CAB joined the interactive session from Bangladesh side while Trade Commissioner at the Italian Embassy in New Delhi, CEOs/Representatives of top Italian trade bodies including ITA, Confindustria, AICE, Rifline, Eni, Magaldi Power, DM Partners, among others, spoke.

Honorary Consuls of Bangladesh in Naples and Florence also joined. Acknowledging untapped huge potentials, all of them shared their perspectives with specific recommendations so that Bangladesh-Italy relations assume economic significance. One of the interesting segments was sharing experiences by the Italian and Bangladeshi business leaders and investors.

Held in a hybrid format, all agreed that the discussion event will effectively serve as a platform to connect the stakeholders of the two countries. Lunch followed the event which was attended by the in-person participants. The Embassy also organized a “Meet the Press” on 01 July 2022 at the Chancery to brief on the event with a good number of journalists from Bangladesh and Italy joining.

Italy-Bangladesh bilateral trade volume stands at around US$ 2.2 billion while Italy remains the 6th largest export destination of Bangladesh. The Embassy said it’ll continue its drive to pursue economic diplomacy, which remains the centerpiece of the activities of the Mission in line with the renewed emphasis on it of the government.

IS BNP IN LEADERSHIP CRISIS?