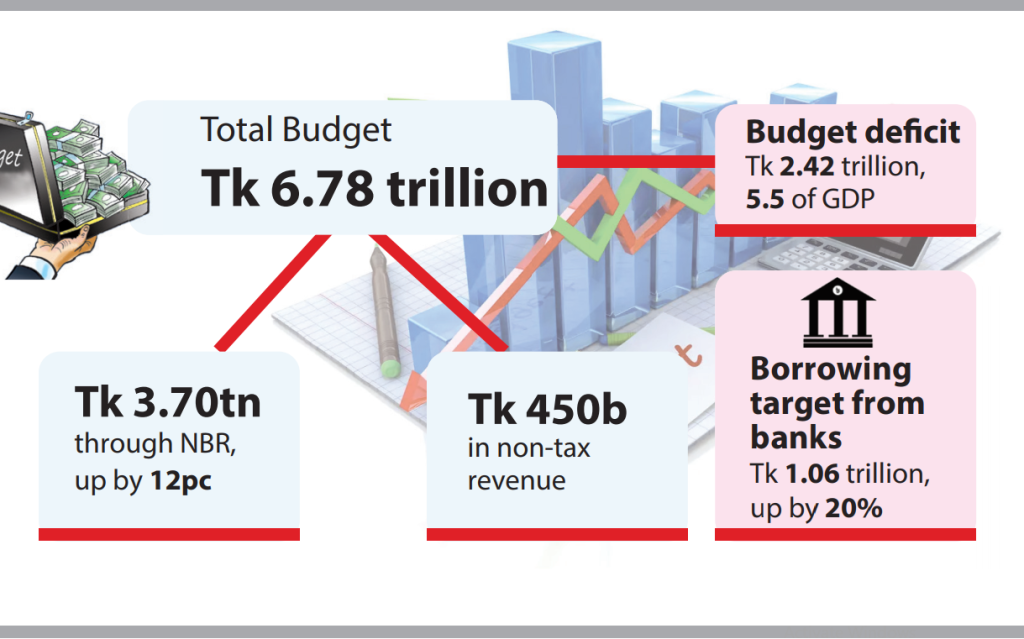 As Finance Minister AHM Mustafa Kamal placed national budget for the fiscal year 2022-23 in the Parliament on June 9, he had in his speech priorities for people amid inflationary concerns. The sheer size of the new financial year’s budget has finally stood at Tk 6,78,064 crore. Of this, a total of Tk 4,31,998 crore has been allocated for management and other expenses while Tk 2,46,066 crore has been allocated for annual development programme (ADP). Given the post-Covid economic situation and the impact of the Russia-Ukraine war, many say that this year’s budget is challenging as well as promising. The proposed budget, however, is by far the largest budget in the history of the country as it saw 12.32 percent rise compared to the one placed last year. Besides, this budget is 14.25 percent more than the original budget. The size of the main budget for the fiscal year 2021-22 was Tk 6,03,081 crore. In the revised budget, it was brought down to Tk 5,93,500 crore. Written by MIR ARMAN FARUK and SAQUIF AHMED

The finance minister presented the budget proposals in presence of Prime Minister Sheikh Hasina with the session being chaired by Speaker Shirin Sharmin Chowdhury. Earlier, President Abdul Hamid signed the budget upon getting approval of the cabinet. The revenue income in the new budget has been projected at Tk 4,33,000 crore, wherein the target of the National Board of Revenue (NBR) is Tk 3,70,000 crore, non-NBR tax Tk 18,000 crore, tax exemption Tk 43,000 crore and foreign grant Tk 3,271 crore. As always, the budget this time too is being considered as a deficit budget. The budget deficit is Tk 2,45,681 crore. To meet the deficit, Tk 2,41,793 crore will come from internal sources, Tk 1,06,334 crore will be borrowed from banks, Tk 40,001 crore will come from non-bank sources. Apart from this, Tk 35,000 crore will come from savings certificates and the target of foreign loan is Tk 95,458 crore. The budget allocated Tk 2,46,066 crore in the ADP, the growth target has been set at 7.5 per cent and inflation at 5.8 percent.

In the fiscal year 2022-23, the allocation for the Department of Health Services and the Department of Health Education and Family Welfare has increased by Tk 4,132 crore. In the last financial year (2021-22), the allocation for this sector was Tk 32,631 crore, which has increased to Tk 36,073 crore this time. In this regard, the Finance Minister said, ‘Considering the overall development of the health sector in the post-Covid period, including the activities taken to address Covid-19 on a priority basis, I am proposing Tk 36,073 crore for the next 2022-23 Fiscal Year which was 32, 731 crore in the last 2021-22 financial year.

Finance Minister AHM Mustafa Kamal has proposed an allocation of Tk 33,798 crore for the overall development of agriculture, food and fisheries and livestock for the fiscal year 2022-23, which was Tk 24,345 crore in the fiscal year 2021-22. The allocation has increased to Tk 9,353 crore. In his budget speech, the finance minister said ensuring safe, adequate and quality animal meat for all is one of the goals of the government. Bangladesh has been able to achieve self-sufficiency in fish production. As a result of the implementation of the government’s fisheries-friendly program and the provision of demand-based and appropriate technical services at the farmer and entrepreneurial level, the fish production in the fiscal year 2020-21 has been 46.21 million tonnes, which is 59.40 percent more than the total production in 2009-10.

Allocations to the road sector are increasing in the proposed budget. In the proposed budget, an allocation of Tk 31,298 crore has been proposed under the Road Transport and Highways Department, which is 12.6 percent of the total development allocation. In the current financial year, Tk 26,042 crore was allocated for this sector.

It is expected that the price of gold will come down in the budget this time. In the budget, advance tax on gold imports has been withdrawn for the expansion of jewellery industry. Gold ornaments will be available at low prices. Wheelchairs and hearing aids are declining in price. It has been proposed to reduce the import duty on hearing aids from 25 to 5 percent. Existing 15 per cent VAT and 10 per cent advance tax on wheelchairs have been exempted. Besides, prices of water filters, aircraft tires, cashew nuts and pesto nuts will be reduced. He also proposed reduction of VAT on air-conditioned (AC) and non-AC restaurants, exemption of VAT on muri and sugar traders, reduction of tax on poultry and dairy products, reduction of VAT on hand towels, paper towels, clinical bedsheets. Meanwhile, for the sale of liquefied petroleum gas (LPG) (in bulk), the Finance Minister proposed exemption of VAT on the first stage purchase of bulk. At the same time, it is proposed to reduce the VAT on yarn.

Increase in coverage of allowances

In the new budget, 2 lakh 9 thousand more women and children have been included under the allowance. In the social security zone, 12 lakh 54 thousand women and children will be covered under the allowance in the fiscal year 2022-23. The number of beneficiaries in the fiscal year 2021-22 was 10 lakh 45 thousand. In this regard, the Finance Minister said that 50 per cent women and widows and husbands are victims of old age allowance, disability allowance and disability stipend program under social security program and rural and urban social service activities under poverty alleviation program, acid burn and rehabilitation of disabled persons. 100 percent women are involved in the activities.

Finance Minister AHM Mustafa Kamal has proposed in the budget to give legitimacy to the money smuggled from the country in various ways. If these funds are legalized with taxes, income tax or any other authority will not be able to raise any question about its legitimacy. The finance minister said if the tax is paid on any property located abroad as per the proposed provision, no authority including the income tax authority would raise any question in this regard. He proposed a 15 per cent tax on immovable property acquired abroad, 10 per cent on immovable property abroad and 10 per cent on remittance cash sent to Bangladesh. This facility will be valid from 1st July 2022 to 30th June 2023.

Inflation has been projected to be 5.6 percent in the new budget. The government is committed towards controlling inflation by preventing inconsistencies between supply and demand. Although inflation remained under control till the first quarter of this year, it has risen recently due to external and some internal factors, the finance minister said in his budget speech. Global causes of inflation include rising inflation among trade partners, rising fuel prices, depreciating currency, disruption of the global supply chain, and the Russia-Ukraine war. Various activities have been taken in the next budget to control inflation.

In his budget speech, the finance minister said the country’s middle or upper-class population is about 40 million, most of whom are not paying income tax. Efforts are being made to bring taxable people under the tax net by taking necessary steps to prevent tax evasion. Till last April, the number of TIN holder has increased to 65 lakh 10 thousand. Besides, the number of taxpayers has increased to 29 lakhs till last March. The government is working to increase the number of tin holders to one crore. Return submission will be made compulsory for all except some cases.

Debt rises, but is money going to people?

One-third of the deficit has to be raised through loans. Debt per capita is rising. But little money is going to the affected people. Even if the debt increases, people are not getting money. For example, although the incentive was proposed to keep the total turnover of the business tax-fee up to Tk 70 lakh, the budget did not offer direct cash assistance to revive the cottage, micro, small and medium enterprise (CMSME) sector. There is no explanation in the budget for the reasons and remedies for the slow progress in the implementation of the previously announced incentives in this sector. But most people are employed here. No emphasis was placed on diversification of tax structure. Diversification of export products and markets, different tax systems based on regions and sectors could have structured the economy. Such guidance was essential in the budget to build the future.

In fine, it is often said that the general people have virtually no control over the ‘people’s money’ in the budget. The whole process is under the exclusive control of the bureaucracy and the executive branch. It is not known why the budget doesn’t get implemented. The absence of prevention, supervision, accountability and democratisation of the economy is evident. As a result, the hopes and aspirations of the common people are not always reflected in the budget. There is inconsistency between many data sets. Universal social security, health, education sectors were alleged to be neglected. Lacking a clear framework and plan for overcoming adversity, the budget revolves around traditional sectarian kinship conservatism. But the whole world is emphasising on expansionary policy to deal with the impact. On the golden jubilee of Bangabandhu Sheikh Mujibur Rahman’s centenary and independence, the provision of universal social security programmes, education and healthcare was the greatest gift given to the people.

Capacity Building Under Scanner: Lessons And Takeaways From Sitakunda Fire