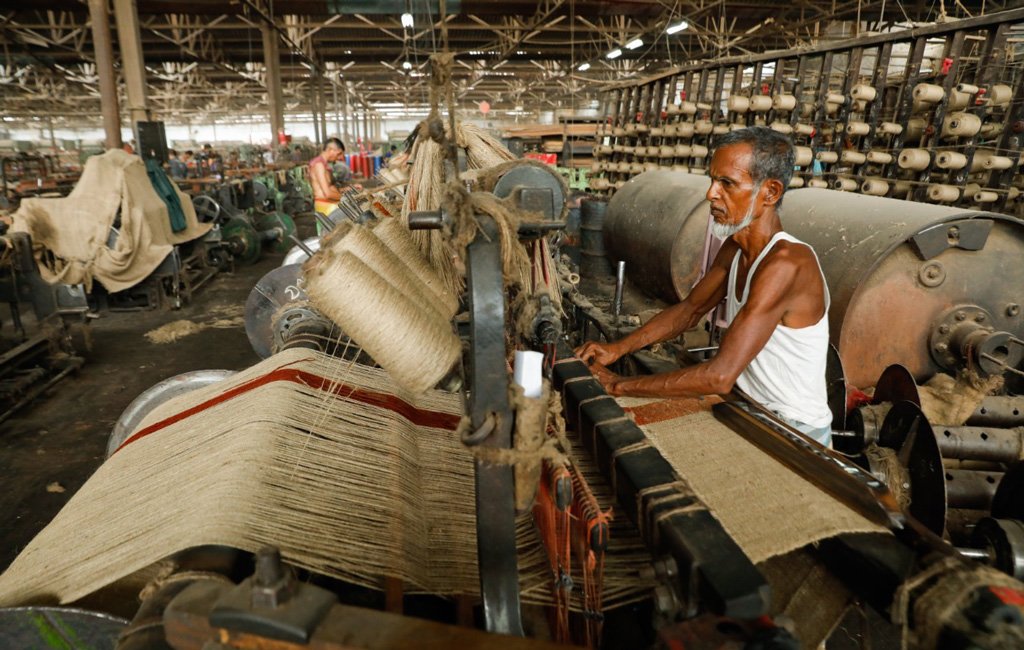 The government at long last has finalised seven private firms to lease out seven more state-run jute mills located in Dhaka, Chattogram Khulna zones for 5-20 years.
The private entities are Bay Group, Rashid Group, Pandughar Group, Steelmark Group, Fortune Group and an Australia-based Golden Fibre Australia PTY Ltd.
Earlier, in the first phase, Bangladesh Jute Mills Corporation (BJMC) leased out four jute mills through a tender.
The lease-out jute mills are Jatio Jute Mills, RR Jute Mills, MM Jute Mills, Gul Ahmed Jute Mills,Jessore Jute Industries,Daulatpur Jute Mills and Platinum Jute Mills.
To get hold of the mills that have remained closed since 2020, the lessees have to pay rents of 24 months in advance to sign the final deal. They will get six months for the rent payments as per lease conditions.
The private companies finalised for the lease are either already engaged in jute business or are going to make a fresh investment in the sector, considering growing demand for environment-friendly jute products at home and abroad.
Under the leasing terms, the firms will be allowed to use existing machinery, land and other capacities of the mills only to produce jute and jute goods. But they will not be able to mortgage the mills’ properties for availing bank loans.
The lessees will operate the mills under its own name and style, carry out transactions through its own bank account and other related documents.
According to BJMC sources, Rashid Automatic Rice Mills Limited, a sister concern of Rashid Group, Jatio Jute Mills, located in Sirajganj under Dhaka zone. The group, with a 30% stake in the country’s rice market, already owns a jute mills called Aleya Jute Mills.
The BJMC has also picked Interstoff Apparels Limited of Pandughar Group for leasing out RR Jute Mills at Sitakunda in Chattogram. Bay Group’s Good Bags & Accessories Ltd, Bestla Ltd, and Jute Fibres BD will invest in the joint venture.
MM Jute Mills, located in the same region, has been leased out to Steelmark Group’s Steelmark Building Limited, a pre-engineered steel building manufacturer. This is the first time the group is entering the jute sector.
Armada Spinning Mills is going to take over Gul Ahmed Jute Mills in Sitakunda, while Finestay Eco Resort & Agro Park will get Jessore Jute Industries.
Golden Fiber Australia PTY Ltd has got lease of Daulatpur Jute Mills located in Khalishpur, Khulna and Fortune Shoes has acquired Platinum Jute Mills.
Golden Fiber Australia PTY along with Slegah Holdings PTY Ltd will invest in Daulatpur Jute Mills.
Fortune Shoes, a company of Fortune Group, which is listed on the share market, will not invest in Platinum Jute Mills it has taken lease of. Instead, Fortune Jutex, another company of the group, will make the investment.
In the face of mounting losses for years, the government shut down 25 state-owned jute mills in 2020, bidding farewell to around 25,000 workers.
In April 2021, the government decided to lease out 17 of the 25 state-run jute mills to the private sector for 5 to 20 years, along with the possibility of extending this period at a later time.
Later, the BJMC floated an international tender so that local, foreign and partnership firms could participate in the bidding process.
In response, 24 firms, including two Indian and one British, submitted 59 proposals against 14 mills.
Three mills in Khulna did not get any proposals from private companies.
After a more-than-six-month process, the BJMC finalised only five private companies to lease out five state-owned jute mills.
The five private entities are Unitex Group, Saad Musa Group, Mimu Jute Mills, Jute Alliance Limited, a joint venture of Bay Group, and the UK’s Jute Republic.
But the foreign company expressed its inability to take over the mills leased out to it by paying 24 months of rent in advance. The BJMC eventually leased out four mills.
After having signed the final deal, Jute Alliance Limited took over Bangladesh Jute Mills Ltd in Narsingdi, while Unitex Group got hold of KFD Jute Mills in Chattogram respectively. The lease period is 20 years.
KFD Jute Mills has three units – Karnafuli Jute Mills, Furat Karnafuli Carpet Factory, and Diversified Decorative Fabrics. Both the mills have already gone into production.
The other two organisations have not yet finalised the lease-out agreement with the BJMC.
Keeping the lease conditions unchanged, the BJMC floated a tender in the second phase to lease out 13 mills at the beginning of this year.
Some 18 local and foreign companies submitted tenders for taking lease of these mills. Of them, four are foreign companies, including two Indian ones.
The Indian companies applied for the lease of seven mills in Khulna region, but they were not eligible for one.