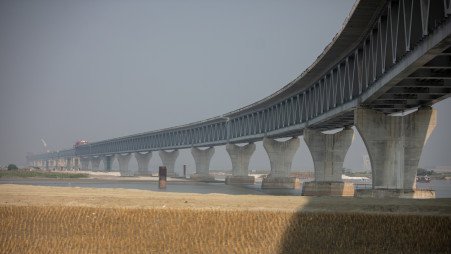 The High Court has ordered the appointment of a commission of inquiry to identify the “conspirators” who spun fake stories of corruption in the Padma Bridge Project.

A bench of justices Md Nazrul Islam Talukder and Kazi Md Ejarul Haque Akondo on June 28 (Tuesday) asked the government to implement the order within a month in accordance with Section 3 of the Inquiry Commission Act, 1965, while hearing a petition. The commission should submit its report within two months of its constitution, the court said.

Previously, on February 15, 2017, the HC issued a rule asking the government why it should not be directed to form an inquiry committee or commission for identifying the plotters to bring them under justice referring several newspaper reports.

The Cabinet Division, Home, Law and Communications secretaries, the ACC Chairman and the Inspector General of Police were made respondents to the rule and asked to reply in four weeks.

On March 20 of the same year, the state asked for eight weeks to respond to the rule and the HC granted it time till May 7.