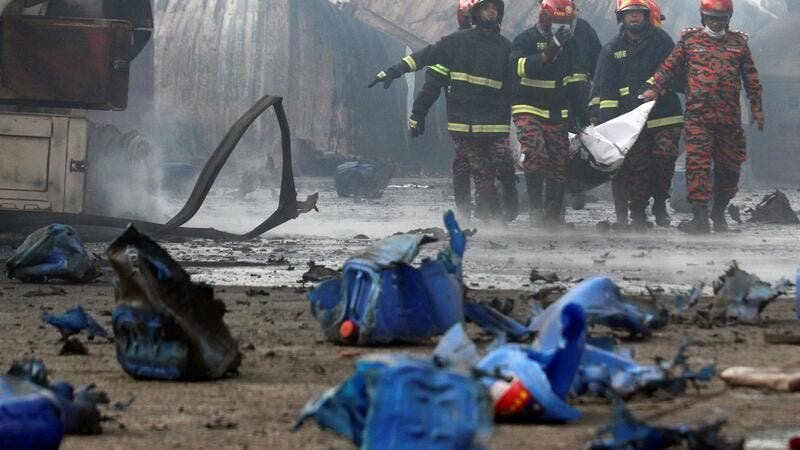 Gausul Azam, a firefighter who sustained burn injuries in the deadly blaze at BM Container Depot in Chattogram’s Sitakunda, has succumbed to his wounds – raising the death toll from the incident to at least 45.

This unsung hero breathed his last during treatment in the intensive care unit ICUof Sheikh Hasina National Institute of Burn and Plastic Surgery at 3 am on Sunday after sustaining burns on 80 percent of his body from the Jun 4 inferno, according to Dr Samanta Lal Sen, chief coordinator of the burns unit.

The fire has claimed the lives of 10 firefighters so far while three other fire service members remain missing, Shahjadi Sultana, an official at the Fire Service Control Room, said.

The fire service, with support from the army, the navy, and other government agencies, eventually put out the flames 86 hours after it erupted.

Gausul went to the front line shortly after the fire broke out but was injured when a sudden explosion rocked the area, according to his brother-in-law Mizanur Rahman.

The 22-year-old, who joined the Fire Service and Civil Defence five years ago, leaves behind his wife and their five-month-old son.

Robin Mia, another 22-year-old fireman, is undergoing treatment at the burn unit’s ICU in critical condition. He sustained burns on 60 percent of his body.

Most of the victims in the incident are fire service personnel, depot workers, container vehicle drivers, assistants and loaders. Over 100 people have been admitted to hospitals in Chattogram and Dhaka with injuries. Some of them are in critical condition.

The inland depot was set up through the investment of private companies in Bangladesh and the Netherlands in 2011. It is owned by Mostafizur Rahman, chairman of the Bangladesh Smart Group of Industries and his younger brother Mujibur Rahman, an Awami League leader from the Chattogram South District.

Containers of hydrogen peroxide produced by a Smart Group company named Razi Chemical Complex Limited were stored at the depot. The fire service believes this chemical was largely responsible for the massive blaze.According to the depot authorities, there were about 4,400 containers at the site. About 400 of those containers were destroyed in the fire.