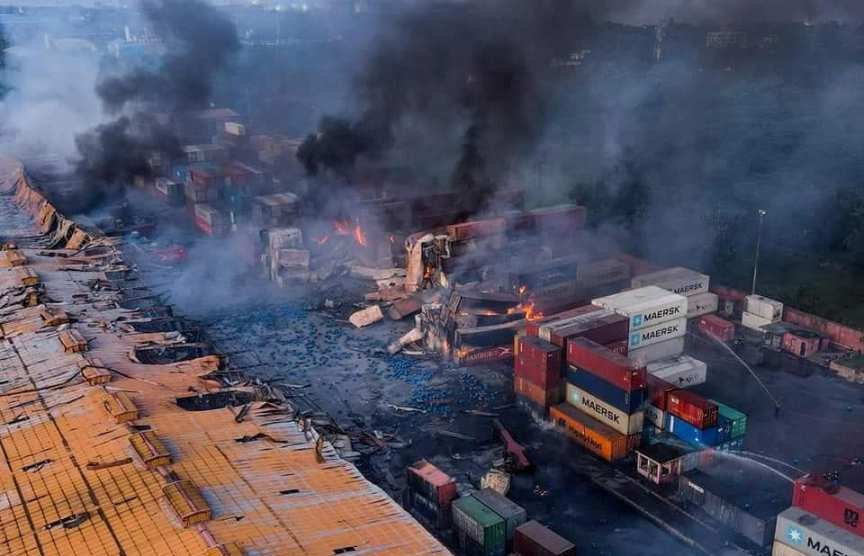 The death toll from the massive fire at BM Container at Sitakunda, Chattogram following a blast last night climbed to 37, fire service officials and police confirmed on Sunday. There were five Fire Service Department members among the deceased, they said.

The bodies of those dead, including the firefighters, were recovered from the rubble of the BM Container Depot in Sitakunda on today at 11 am. Of those injured, 135 people were admitted to Chattogram Medical Collage Hospital. Hundreds more are being treated at other hospitals in Chattogram.

Chattogram Fire Service and Civil Defence Assistant Director Faruk Hossain said a large explosion rocked the area around 10:45pm on Saturday. “The explosion was heard within a radius of 4 km from the spot,” Faruk added.

After hours of hectic effort, 25 firefighting units managed to bring the fire under control around 7.30 am on Sunday. After the incident, 15 firefighting units were dispatched immediately to fight the fire, but the presence of highly flammable chemicals in the containers complicated the situation. The unit is further extended at a later time. 183 personnel of 25 units of fire service are working to control the fire. Besides, fire service members from Noakhali, Feni, Laxmipur and Cumilla districts are also working on the spot to control the fire from spreading.

Fire started from the container

The BM container is located on 24 acres of land in Bhatiari area of ​​Sitakunda. The company mainly deals in exporting products. From here the containers are prepared for export and sent to Chittagong port. The company works to export 36 types of products. Sources said that there were 50,000 containers at the time of the incident. At least 200 workers were reportedly working there at the time of the fire. However, the exact number of people present there during the incident remains unknown.

Here to mention, BM Container Depot, a Dutch-Bangladesh joint venture, was set up as an inland container depot (ICD) and it is operating since May, 2011. It is one of 19 such ICDs located in Chattogram. The chairman of the depot is Dutch businessman Bert Pronk, who has other investments too in Bangladesh, while the managing director is Mustafizur Rahman of the Smart Group of Industries.