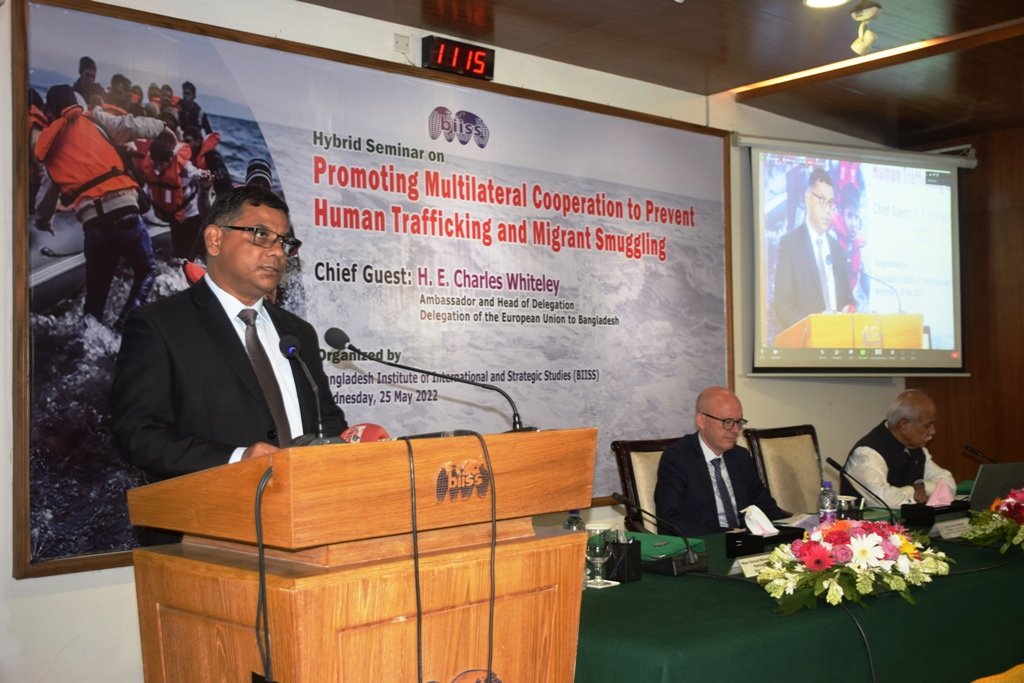 Speakers at a city seminar on May 25 laid emphasis on joint efforts and broader cooperation to prevent human trafficking and migrant smuggling.

Organised by Bangladesh Institute of International and Strategic Studies (BIISS) at its auditorium, the hybrid seminar was titled “Promoting Multilateral Cooperation to Prevent Human Trafficking and Migrant Smuggling.”

Charles Whiteley, Head of Delegation, Delegation of the European Union to Bangladesh, was the chief guest at the event, chaired by BIISS Chairman Ambassador Kazi Imtiaz Hossain.

In his welcome address, Major General Mohammad Maksudur Rahman, BIISS Director General, said Bangladesh is aware of the increasing challenges of human trafficking. Under the prudent leadership of Prime Minister Sheikh Hasina, Bangladesh is implementing a National Action of Plan for Prevention and Suppression of Human Trafficking for the term 2018-2022, he noted.

Ambassador Whiteley said that refugee issue has become one of the hot and red button topics in Europe. Sexual exploitation also continued to be the most commonly-detected form of trafficking, he pointed out.

The working session of the seminar was chaired by Professor Dr. Tasneem Siddiqui, Department of Political Science, University of Dhaka, while Benuka Ferdousi, Research Fellow, BIISS, presented on “Human Trafficking and Smuggling of Migrants – Global and Bangladesh Perspective.”

Asif Munier, Migration and Displacement specialist, presented on “Multilateral Cooperation to Prevent Human Trafficking and Smuggling of Migrants- Bangladesh Perspectives.” Senior officials from different ministries, ambassadors, diplomats, and military officials, among others participated in the event.

What UN can do for early repatriation of Rohingyas?