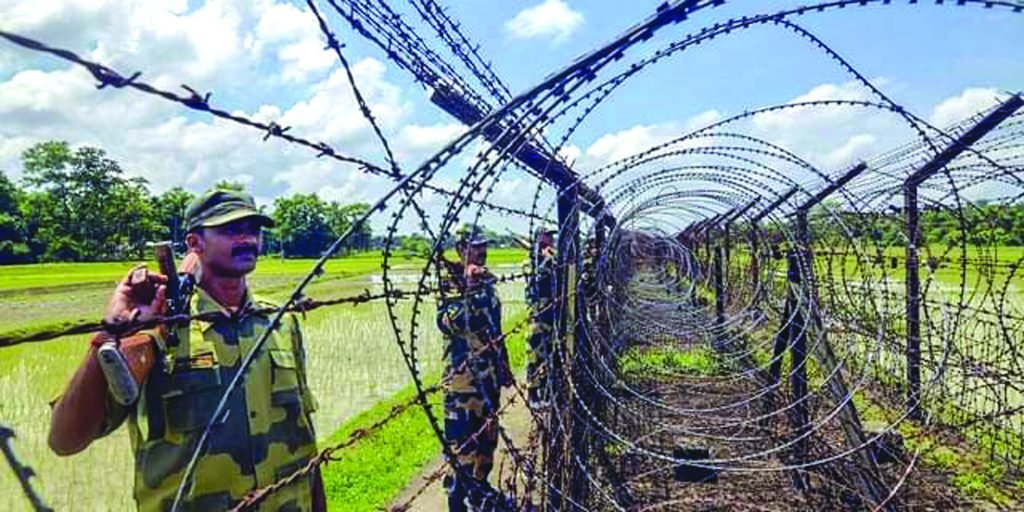 A further silver lining shining amidst the bleak situation is the deployment of non-lethal weapons for stopping Bangladeshi nationals on the border. Moreover, the Director General of BSF reiterated that border killing will be brought to a standstill and guilty personnel will be taken into the charges. Initiatives like these showcase the earnest concern from Indian authorities in response to the losses of lives surrounding the Indo-Bangladesh border, reports Nashir Uddin

Bangladesh and India, the two neighbouring countries share a 4,096-kilometre-long international border, which is the fifth-longest land border in the world. The borderline includes Assam, Tripura, Mizoram, Meghalaya, and West Bengal. On Bangladesh side, Mymensingh, Khulna, Rajshahi, Rangpur, Sylhet, and Chattogram divisions are situated along the border. Although a number of pillars mark the border between the two countries, small demarcated portions of the border are fenced on both sides. Deaths occur along the border on a number of occasions round the year as result of people attempting to illegally cross into India from Bangladesh, cross-border firing and cattle smuggling.

However, rays of hope shines on the looming menace of cross-border crimes that have been surrounding the Indo-Bangladesh Border claiming significant number of lives. Although 18 Bangladeshi Nationals expired on borders by India’s Border Security Force (BSF) in 2021, the said numbers are comparatively lower by a considerable margin from other years; which is pointing towards a decline in the Bangladesh-India border killings. It is an exceptional improvement as the year 2020 witnessed the highest number of killings of Bangladeshi nationals along the border by BSF in the last 10 years with a staggering loss of 45 Bangladeshi citizens in the border area over a span of 12 months. But it is the difference in the losses between the two years is what paves the way for hope and proves the results of relentless diplomatic efforts led by both the nations.

A further silver lining shining amidst the bleak situation is the deployment of non-lethal weapons for stopping Bangladeshi nationals on the border. Moreover, the Director General of BSF reiterated that border killing will be brought to a standstill and guilty personnel will be taken into the charges. Initiatives like these showcase the sincere concern from Indian authorities in response to the losses of lives surrounding the Indo-Bangladesh border.

The number of border killings in Indo-Bangladesh border were on a decline since 2016, before it went up again in 2019, with 43 lives lost in the border area by the BSF that year, according to data compiled by different human rights defenders. The compiled data from Ain o Salish Kendra (ASK), a human rights organization shows the death of 43 people in 2019, 14 in 2018, 24 in 2017, 30 in 2016, 46 in 2015, 32 in 2014, and 26 in 2013. Although the fluctuations of the numbers here may show slight increase, the amount of lives lost in the aforementioned years are the least compared to the rest in the last two decades. This illustrates the success, which is gained through continuous diplomatic efforts and affirms the concern from the higher officials across India.

Both Bangladesh and India occupy the two most critically important positions in the entire sub-continent of South Asia. Their roles to set the standard in terms of economic and political factors have always been of utmost priority. The half a century long amicable relationship between the two nations have been evolving to set unprecedented examples of political, diplomatic, military and humanitarian support since the liberation war that played an important role towards the independence of Bangladesh as a secular nation. India has been playing a pivotal role when it comes to the political discourse of Bangladesh, first in the context of state formation based on the two-nation theory in 1947 and later in the emergence of Bangladesh as an independent nation in 1971.

Despite this, the cordial relations between these two countries did not continue for long. India has fenced 2500 km of the total border of 4096 km, an event which is not found even in the borders of the most hostile neighbouring countries. To India’s defence they state that the border fencing is only there to prevent illegal migration. However, the ever-climbing numbers of lives lost in the borders has always remained an issue for both the countries to solve.

The government of both nations have acted on various initiatives to mitigate these problems. In July 2011, both the countries signed a co-ordinated border management plans to effectively control the cross border illegal activities. And it has been often speculated by various scholars and diplomats that, making cattle trading legalized between Bangladesh & India will significantly reduce illegal trespassing through Indian border which will mitigate border killing as well.

Over the years, India and Bangladesh made significant progress in furthering bilateral ties. However, for a long time, the relationship was mired in mistrust and suspicion. Although the political will displayed by the top leadership of both countries helped in resolving some long-standing issues; other important issues remain yet to be addressed. In 2019, Prime Minister Narendra Modi described India–Bangladesh relationship as being in its “Golden Era”.

Despite repeated promises from the highest levels of India to stop border killings, it has yet to cease completely. The diplomatic dialogues between India & Bangladesh have been focused on bringing the border killings down to zero, but due to the volatile nature of either legality or illegality of the activities surrounding the region makes this entire process arduous. And this results in the loss of lives around the Indo-Bangladesh borders. Although justice remains out of reach in specific cases like Felani’s murder, most of the cases on the lives lost have surfaced as an attempt of self-defence from the BSF.

A study from the Human Rights Watch (HRW) several years ago shed some insightful light over a number of cases. The report called ‘Trigger Happy’ brings light over survivors and eyewitnesses who allege that the BSF fired indiscriminately without trying to apprehend or warn them. The BSF also claimed that its members fired when the miscreants tried to avoid arrest. However, the use of lethal weapons on suspicion of any crime is not justified and is frowned upon by the higher officials of both the countries.

Last year, the Foreign Minister of Bangladesh AK Abdul Momen said in Dhaka, “Border killings are a shame for India. It has been decided between the two countries that no lethal weapons will be used on the border. No shots will be fired. But it is happening. So, it is a shame for them. And sadly, as a result of that we are losing valuable lives of Bangladeshi’s. ”

Meanwhile, at a function in Dinajpur last year, Indian High Commissioner to Bangladesh Vikram Kumar Doraiswami said that the border killings were definitely sad and unexpected from either of the countries. Indian border guards have been specifically told not to open fire on the border if there is no threat of an attack on them. “We do not want border killings in any country. Border killings are a heinous act.”

Indian authorities defended border killings by explaining that the border forces open fire when it is “inevitable” and, in particular, when their lives are being threatened during cross-border crimes. At the end of four days of biannual talks between chiefs of Bangladeshi and Indian border security forces in the capital Dhaka last September, BSF Director General Rakesh Asthana assured that his force will take extreme care at the border to reduce civilian casualties during night surveillance. And we can already see the visible progress due to the decrease in the number of lives lost in the last year which is the second lowest number of border killings in the last two decades.

Even after all the endeavours regrettably last December, a Bangladeshi civilian was killed by the Indian forces while a five-day director general-level conference between the two countries’ border forces was taking place in Guwahati, India, with one of its key focuses to avoid killings at border.

The Bangladesh-India border was fenceless and peaceful until the 1980s. The situation changed after a mass movement took place in the Indian state of Assam from 1979 to 1985 against alleged illegal immigrants from Bangladesh by the majority Assamese people. India began building the fence to stop illegal immigration, smuggling and alleged infiltration by members of separatist and extremist outfits. BSF soldiers also adopted a shoot-to-kill policy toward anyone who tried to get close to the fence.

The Indo-Bangla border line is used for lawful as well as unlawful or illegal transaction. Lawful and legal transactions are caused through different land ports across the border. The border line is being used as a route of smuggling cattle and livestock, food items, medicine and drugs from India to Bangladesh by unauthorized people. On the other hand, fertilizer, diesel, fish, insect killer etc., are being smuggled from Bangladesh to India. Moreover, illegal immigrants from both sides cross the border line in search of improving their lives are often found. But the matter to be noted that the BSF , while in their attempt to maintain border line or check illegal immigrants for preventing cross border terrorism or preventing smuggling, have ended up causing the loss of many Bangladeshi lives.

Bangladesh and India are two countries of South Asia who play a crucial role in the economic and cultural aspects of the region. India is one of the world’s largest economic and democratic powers. During last decades, India’s economy has grown up. As one of the world’s largest democratic country, India needs to act fast in order to mitigate the border crisis with a friendly nation like Bangladesh. As this has become essential to uplift the reputation of India to promote Human Rights.

A journey of the last two decades of the border crises between India and Bangladesh has seen both its ups and downs. From the mourning, dreadful years like 2006 and 2007 when the number of deaths around borders spiked up to 155 and 118 to the hopeful years of 2018 and 2022 when the number of lives lost could be mitigated to as low as 11 and 18; the relentless diplomatic endeavors between both the nations along with concern and empathy of India minimizing the border crisis has become possible to this extent. Now both the nations can finally point their aim towards reducing the casualties to a zero and achieving peace across the borders.