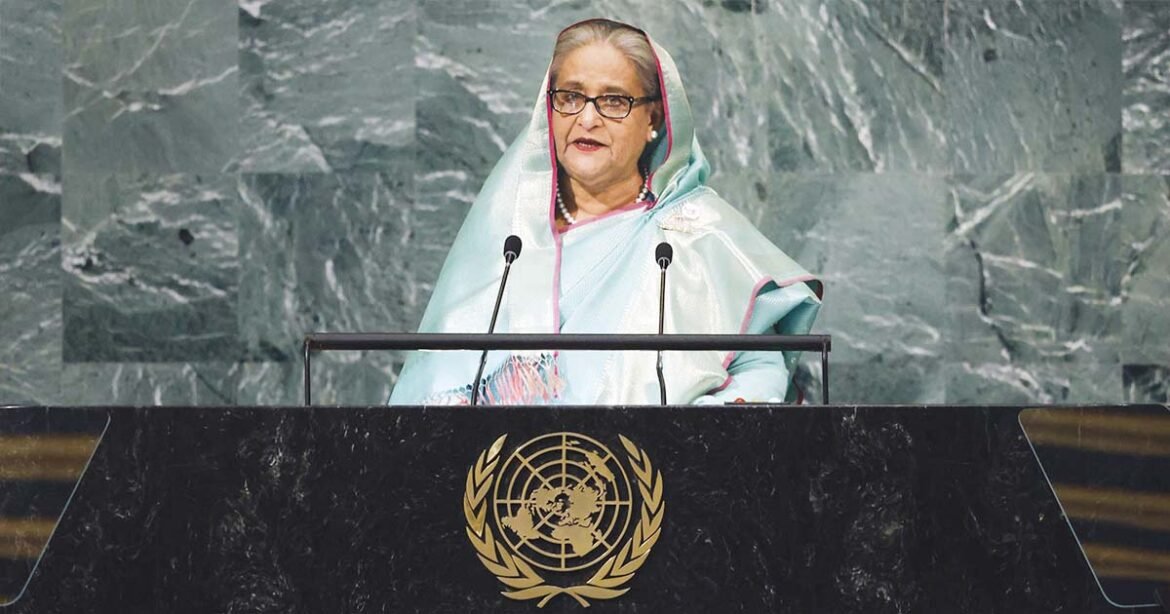 Urging the United Nations (UN) to play an effective role in the safe, dignified repatriation of Rohingyas to their country of origin i.e., Myanmar, Prime Minister Sheikh Hasina has called for the international community to end wars and sanctions through dialogue and help tackle the dire effects of climate change. The premier came up with the clarion calls while delivering her annual UN speech in New York on September 23.

Alongside the Rohingya crisis, Russia-Ukraine war, climate change, and food insecurity; other issues concerning the world as well as Bangladesh perspectives were prominently featured in the PM’s speech. The 77th session of the UNGA took place from 13th to 27th September at the UN Headquarters in New York, United States, with leaders of countries and governments from 193 member states.

The UNGA session has been held at a time when overlapping crises unfold around the globe. The world leaders exchanged their insights in the General Assembly Hall, on the theme ‘A watershed moment: transformative solutions to interlocking challenges’ to contemplate and debate on how they can collectively solve the shared problems of present time and create a sustainable, just future for all.

Prime Minister Sheikh Hasina once again called upon the UN and the global leaders to take effective actions for a permanent solution to the Rohingya crisis ensuring their safe, sustainable, and dignified return to the Rakhine state in Myanmar. She warned the global community that if the problem persists further, it may affect stability and security beyond the region. She said,

“The ongoing political turmoil and armed conflicts in the country has made the repatriation of the displaced Rohingyas more difficult. I hope the UN will play an effective role in this regard.”

Mentioning that last month Bangladesh has witnessed five years of the 2017 mass exodus of the Rohingyas to the country, the premier said with great concern, “Not a single Rohingya was repatriated to their ancestral home Myanmar, despite our bilateral engagements with Myanmar, discussions with partners in trilateral format and engagements with the UN and other partners to assist Myanmar to create necessary conditions for safe and dignified repatriation.” Sheikh Hasina highlighted that the prolonged presence of the Rohingyas in Bangladesh has caused serious ramifications on the economy, environment, security, and socio-political stability in Bangladesh.

The Prime Minister pointed out that the impact of climate change is one of the major threats for humankind. She mentioned that her government has led to many trans – formative measures to tackle the terrifying impacts of climate change consistent with implementing the Paris Agreement and achieving the Sustainable Development Goals (SDGs).

She said that during Bangladesh’s presidency in Climate Vulnerable Forum (CVF), they have launched ‘Mujib Climate Prosperity Plan’ that aims to put Bangladesh on a sustainable course from “one of vulnerability to resilience to climate prosperity”. Hasina said, “Our national plans and policies on climate change and natural disaster are gender responsive and take into account the critical role of women in adaptation and mitigation,” adding that Bangladesh is ready to support other vulnerable countries to develop their own prosperity plans. She finally called on the world leaders to promote inclusive climate action.

As the world commences to recover from the devastating effects of the pandemic over the past two and a half years, the Prime Minister said that the Russia-Ukraine conflict has plunged the world into another collective uncertainty. Hasina said that as a result of the Russia-Ukraine war and the economic sanctions and counter-sanctions, there has been a disruption in the supply system and an unusual increase in the prices of various consumer goods including fuel and food around the globe. Because of this, she said, economies like Bangladesh are under severe pressure as inflation has also increased. She observed that countries that are already in vulnerable situations needing support to achieve the SDGs will now face even more challenges.

However, she said that her government has taken measures to deal with the situation. Urging the world leaders to come up with a peaceful solution through dialogue, she said, “My appeal to the conscience of the world, stop the arms race, wars, and sanctions. Give children food, education, healthcare, and safety and make peace through fruitful discussions.” As a reflection of the country’s peace-centric foreign policy, she said Bangladesh has consistently demonstrated its commitment to UN peacekeeping operations as the leading troops contributing country, presently being the largest.

To conclude, Sheikh Hasina in her speech said vaccination is the key to safe transition from the pandemic, and thanked the World Health Organization (WHO) and the partner countries for providing vaccine. The premier further said that Bangladesh is interested in looking for transformative solutions to poverty alleviation, mitigating climate change effects, preventing wars and finance, energy, and fuel crises that the world is grappling with currently.

Experts termed the Prime Minister’s speech as courageous and appropriate. Analysts say that the premier’s call for peace on the Russia-Ukraine war and the ongoing conflict around the world is compatible with the peace-loving policy of Bangladesh. Bangladesh appealed to the UN for the sixth time for the repatriation of Rohingyas. Analysts also applauded Sheikh Hasina’s call towards the UN to play an effective role by referring to five years of Rohingya exodus and hoped for a swift solution.

COMMUNAL VIOLENCE: WHAT LEADS TO RECURRENCES?