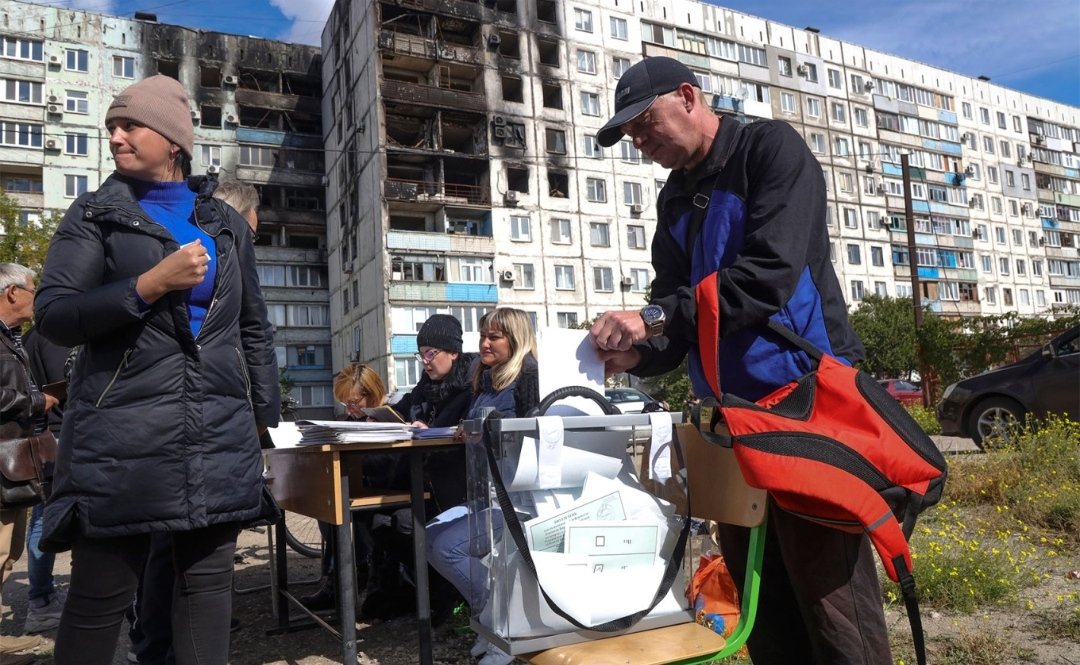 Authorities favoring Russia have organized referendums in four regions of Ukraine. While Ukraine and Western nations has labelled the move ‘a sham’, the ballots have sparked fears that they may provide a pretext for a new, hazardous stage of the war.

According to Russian official media, four regions of Ukraine that are now under Russian control appeared to vote resoundingly in favor of joining the Russian Federation. Despite protests from across the world, the Russian-run referendum was held over five days from September 23 to September 27. The process was not independently monitored in the lack of international recognition.

Voting took place in the breakaway eastern regions of Donetsk and Luhansk. It was also organized in the southern areas of Kherson and Zaporizhzhia, which are under Russian occupation. Around four million people were asked to vote, and the four regions together occupy about 18% of Ukraine’s total area.

Numerous voting booths were open to refugees scattered throughout Russia, including those in Crimea, a southern Ukrainian peninsula that Russia annexed in 2014. Large majorities in favor of joining Russia were seen in the partial results of the vote there.

Voting ‘results’ were likely predetermined well before any ballots were actually cast. US President Joe Biden said last week, “Russia’s referenda are a sham – a false pretext to try to annex parts of Ukraine by force in flagrant violation of international law, including the United Nations Charter.”

In Zaporizhzhia, the Election Commission head reported that 93.11% voted to join Russia. After analyzing 91.2% of ballots in the self-proclaimed Luhansk People’s Republic, 98.54% favored joining Russia. A total of 93.95% of the votes in the self-declared Donetsk People’s Republic were in favor of joining Russia after 32% of the ballots had been counted. The pro-Russian government in Kherson reported that once all votes were tallied, 87.05% of voters supported joining Russia, while 12.05% were opposed.

The pro-Russian government in Kherson reported that once all votes were tallied, 87.05% of voters supported joining Russia, while 12.05% were opposed.

Outcome as a whole

There are rumors that Russian President Vladimir Putin may declare the annexation of the four areas in a speech during a joint meeting of the Russian parliament on Friday. A few days after a similarly unrecognized referendum was held in Crimea, he announced in March 2014 that the region had joined Russia.If Russia takes over the four regions that Moscow does not fully control, it could take the war to a new and more dangerous level since Moscow would see any attempt by Ukraine to take them back as an attack on its own territory.

Ukrainian President Volodymyr Zelensky blamed Russia of ‘brutally violating the UN statute’ by trying to annex territories seized by force. On Tuesday night, he declared, “This farce in the occupied territories cannot even be called a mock referendum.”

President Putin defended the referendums by saying that they were meant to stop the Ukrainian government from persecuting ethnic Russians and people who speak Russian. The Ukrainian government denies this claim.The Russian president stated in televised remarks that “saving people in all the territories where this referendum is being held is at the top of our minds and the focus of attention of our entire society and country.”

The response of this referendum

Foreign Minister of Ukraine Dmytro Kuleba requested stronger penalties against Russia from the EU. “The Russian economy needs to be hit hard, and we need to respond in an incredibly serious and effective manner. Russia will be more motivated to escalate and seize further territories if the response to the so-called referendums is muted,” he said.

In response to the referendums, the UK imposed fresh sanctions on prominent Russian figures involved in implementing the results. Tens of thousands of soldiers and civilians have died or been injured since Russia invaded Ukraine on February 24; entire cities and villages have been largely leveled.

The possibility of the war getting worse has made people worry more about what will happen next – especially when it comes to nuclear weapons. Officials are attempting to reassure their citizens and international partners. “Russia understands very well what the US would do in response to the use of nuclear weapons in Ukraine because we have spelled it out for them,” said National Security Adviser Sullivan.

Teaching values ​​to children through ‘Hasina and Friends’ game