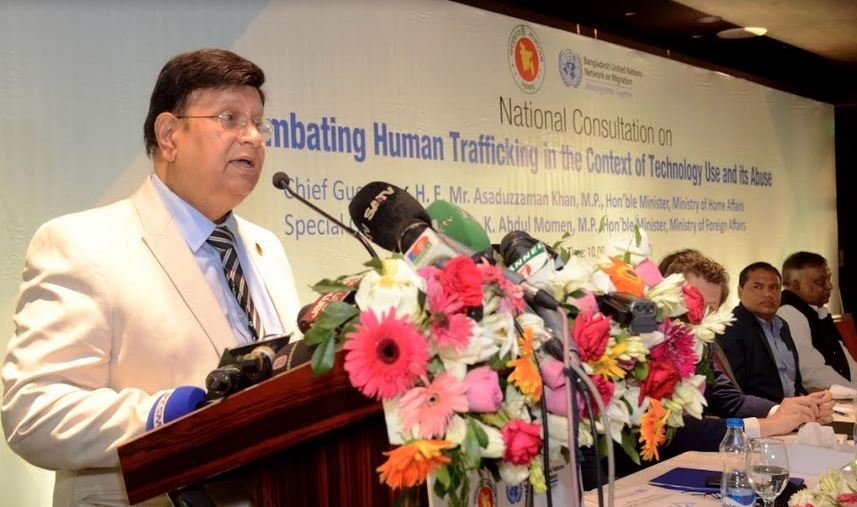 The theme of World Day Against Trafficking in Persons-2022 is “Use and Abuse of Technology,” and focuses on the role of technology as a tool that can both enable and combat human trafficking. To mark the day, the Ministry of Home Affairs (MoHA) and the Counter Trafficking in Persons Technical Working Group (CTIP-TWG) of the Bangladesh UN Network on Migration (BDUNNM) organised the eventat a city hotel on July 30. Dr AK Abdul Momen, Foreign Minister;Asaduzzaman Khan Kamal, Home Minister;Robert Chatterton Dickson, British High Commissioner to Bangladesh; Nathalie Chuard, Ambassador of Switzerland to Bangladesh; Jeremy Opritesco, Charge d’Affaires of the Delegation of the European Union; and Scott Brandon, acting Deputy Chief of Mission, US Embassy in Bangladesh were also present in the event. Participants at the consultation called on the government of Bangladesh, international partners, the private sector, and civil society actors to focus their efforts on advancing a robust, rights-based approach aimed at preventing the exploitation of individuals by trafficking networks and shrinking the space in which they operate.

What did Foreign Minister say?

Speaking at the National Consultation on “Combating Human Trafficking in the Context of Use of Technology and its Abuse”, Dr Momen mentioned that human traffickers equipped with technology can do greater harm but the government agencies and relevant stakeholders can undo the efforts of the trafficker effectively with the help of technology. He said, “We need to keep in mind that human trafficking is trans-boundary crime and the traffickers may possess better technology than it is available in a particular country.” To end human trafficking, Momen said they need a comprehensive view of it. “We must ask, why young men and women, in the first place, become victims of the dangerous route of trafficking. We know why.”

What did Home Minister say?

In this regard, Home Minister Asaduzzaman Khan said trafficking in persons is a serious human rights violation and the government has a zero-tolerance policy on this. “We are actively taking steps to fight this horrific crime,” he said. Mentioning that fight against trafficking requires multi-stakeholder engagement, the minister said, “We will continue to work tirelessly to increase awareness around human trafficking utilizing the digital space.”

To conclude, the scourge of human trafficking has expanded into cyber space as a result of the expansion of technology use around the world, which in turn has been accelerated by the Covid-19 pandemic and the transition of our daily lives to online platforms. It is imperative that efforts to combat human trafficking are coordinated both online and offline.