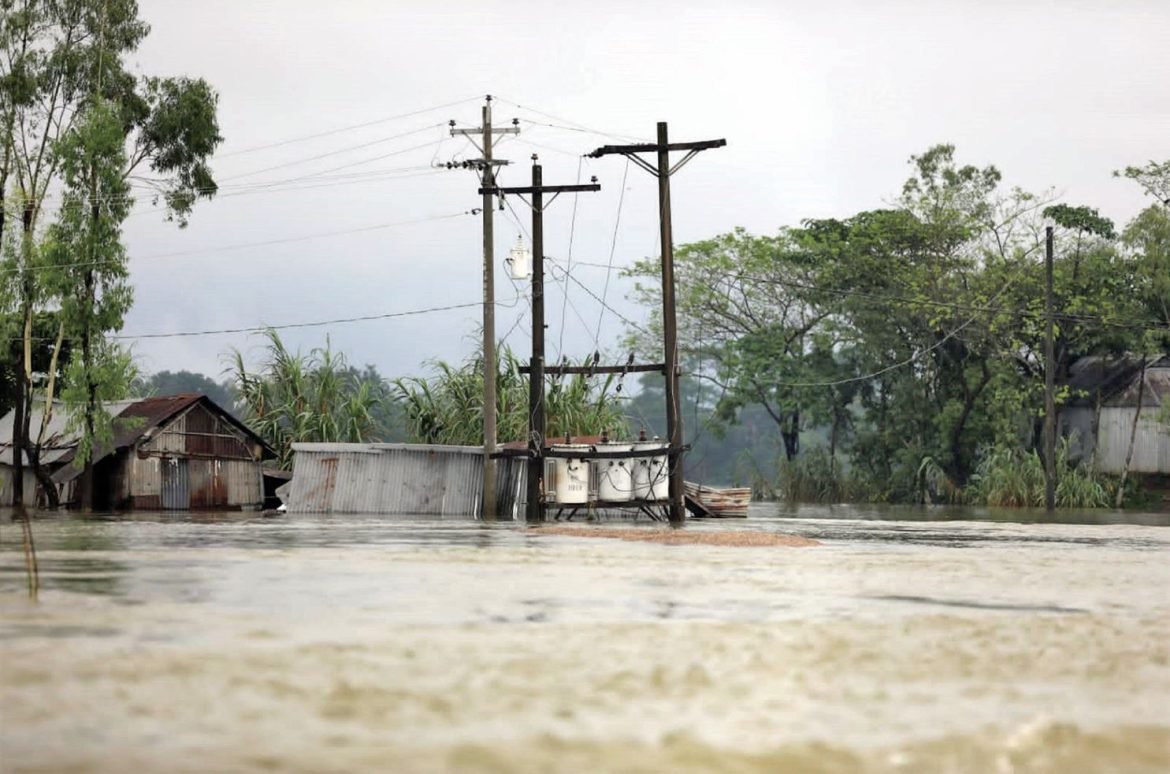 While many low-lying areas of Bangladesh are burning in intense heat, Sylhet is floating in the water. Terrible flood situation is prevailing in Sylhet. Earlier, crops in Sylhet including the surrounding haor area were inundated by floods last April. Less than a month later, floods hit Sylhet again. This time the flood came in a more devastating form. Almost the whole of Sylhet has been submerged. Most areas of Sunamganj, Kurigram are also submerged. Why is Sylhet flooding again and again? Why are the floods so severe?

Concerns believe that the catastrophic floods are due to flooding and filling of major rivers in Sylhet especially Surma, Kushiyara, loss of river carrying capacity, occupation of various reservoirs in and around the city, lack of dams, unplanned development and excessive rainfall in Meghalaya. Researchers are witnessing these reasons behind the sudden onset of floods in the north-eastern districts of Bangladesh, including Sylhet, Sunamganj and Kurigram.

Flooding and filling of major rivers in Sylhet

Two different forms can be observed of the two main rivers Kushiyara and Surma in Sylhet. In the rainy season, the water of these two rivers overflows and submerges the people. And in the summer it dries up and turns into a dead river. About 249 km long, Surma is the longest river in the country. It enters Bangladesh from Barak river of India through Zakiganj border of Sylhet and flows through Sylhet, Sunamganj, Netrokona and Kishoreganj and joins Meghna. This river remains waterless for most of the year. The bottom of the river is filled with silt. As a result, sandy lands emerge over Surma in dry season. On the other hand, the river overflows due to low rainfall. In the rains, the river water overflows and submerges the crops of the haor. The source of this river is also filled. During the dry season, 35 chars arose at a distance of 32 km from the source of the river. As it flows over the two countries, the source river excavation is also stuck as no decision has been taken in the joint river commission. According to some officials of the Sylhet office of the Water Development Board, a proposal was sent to the ministry from Sylhet in 2012 to dig the source of the Surma River. The river was then excavated and surveyed. After the survey, the ministry informed at that time that it would take initiative to dig the river. After that no further initiative was taken in this regard. Later in 2016, 800 meters of Surma River was dug in Kanishail of Sylhet sadar upazila. At that time proposals were submitted for river dredging in some parts of Sylhet sadar upazila and Kanaighat upazila. That too has not been implemented yet.

The Kushiyara, another major river in Sylhet, is also flooded. Abdul Karim, general secretary of the Bangladesh Environment Movement Sylhet, said, “The bottom of the Surma and Kushiyara rivers are full. In addition, civic waste, especially plastics, is firmly entrenched at the bottom of the Surma River. Due to this the river is not able to hold water.” “As it is a joint river, “the decision of the two countries is needed to fill the source of the river. That is why we have repeatedly demanded the excavation of Surma River in the part of Sylhet metropolis,” he added.

Loss of carrying watercapacity of river

Excess rainwater from Meghalaya or Assam flows out of the haor by river and flows into the Bay of Bengal via Meghna or Jamuna. But researchers say the main reason for this year’s flood is the sudden flow of excess water to come out of the upper reaches. And for this they are blaming the reduced navigability of the river. River researcher Muminul Haque Sarkar said,“Silt and rocks come down with upstream water every year. It came and filled the bottom of the river in Bangladesh. The carrying capacity of the river decreases. Then more water in this river actually overflows and floods the surrounding area.” Researchers have blamed unplanned rock extraction in the Indian subcontinent for the loss of river navigability. Professor AKM Saiful Islam says that especially as a result of rock extraction upstream in India, the soil loosens and flows into the river. As a result, the bottom of the river is filled. There is a navigability crisis being created. Trees are also being cut down there. In addition to this, the researchers are censuring for not dredgingthe rivers properly, filling the river bed with garbage, and filling up the wetlands as a result of houses or urbanisation. For this reason, researchers believe that floods occur in Sylhet or Kurigram areas only when there is heavy rainfall in Meghalaya or Assam.

Filling and occupying the waterbodies

Meanwhile, in the last three decades, more than 50 dighis of the city have been filled. As per Bangladesh Environmental Lawyers Association (BELA), 15-20 years ago there were more than 50 big dighis in Sylhet city. But now there are only 10 or 11. The rest is filled. Government institutions have also been formed by filling up many water bodies. Besides, about 25 natural canals, big and small, have flowed through Sylhet. Originating from the foothills or hills, the canals merge into the Surma River. These canals were used to drain water in the rainy season. As a result, waterlogging would not occur. Now in many places the existence of these canals is not found. Due to the occupation of the canals, waterlogging occurred throughout the city in a small amount of rain. An official of Sylhet City Corporation said that the length of 13 big canals flowing through the city is about 63 kilometres. Illegal occupiers have been occupying both sides of these waterways for a long time. Apart from this, residential areas have been developed by filling haors in the suburbs of the city. The haor of Bagha area has been filled by the cantonment. The chief engineer of Sylhet City Corporation said, “We have recovered about 30 km of canal. As a result, the city is no longer waterlogged like before. In some areas of the city, water accumulates due to heavy rains but it goes down in a short time. No more reservoirs are being filled.”

Experts say most of the villages in Sylhet, Sunamganj, Kishoreganj or Netrokona haor areas do not have city protection dams. As a result, if the water level in the haor or river starts rising for any reason, it quickly enters the city or residential area. AKM Saiful Islam, director of the Institute for Flood Management, said,“If that is not done, then the houses have to be built high and shelters have to be built also. That too was not done in Sylhet. As a result, when such flash floods occur, the damage is much greater in the region. “

The land in Sylhet or Sunamganj area is not like before, there was navigability in the river, and there were not so many roads or installations before, which has been built afterwards. As a result, now it takes time for the flood waters to recede. In the past, there may have been swamps and ditches that could have been flooded, but never in a large-scale. Recently, pocket roads have been constructed at various places in Haor. As a result, water flow is being obstructed. Roadways has been made abolishing waterways. As a result of building houses in urban areas, water is no longer available to the ground. Due to these reasons waterlogging are happening recurrently and the level of floods is intensifying.

Another major cause of the floods, according to urban disaster experts, is that the bridges and culverts that were built in the haor area did not take into account the severity of the floods. That’s why the water is not moving fast. Due to this the duration of the flood is getting longer. Another thing is that when building roads, there were sloped not evenly spaced. That is why the roads that were built for the betterment of human life has now become the cause of human suffering.

The Cherrapunji region of India has the most rainfall in the world. The water vapour from the Bay of Bengal collided with the mountains of Meghalaya and rose. There it became heavy and began to rain. According to ArifuzzamanBhuiyan, an official of the Flood Warning Centre, Cherrapunji in India has recorded 982 mm of rainfall in the last 24 hours. Due to the heavy rains there has been a terrible flood this time. AKM Saiful Islam, director of the Institute of Water and Flood Management at Bangladesh University of Engineering and Technology, said there has been such continuous rain once in 1995, 2696 mm in three days and 280 mm in 1984. This kind of heavy rainfall is very rarely seen. The Cherrapunji area of ​​Meghalaya, India starts from the border of Sunamganj district. As a result, the water from there flows directly into the haor of Bangladesh. The river Bhairab or Meghna flows into the sea. But river researchers believe that there is a big difference between the past rainfall pattern and the current conditions. The heavy rains in Cherrapunji are believed to be the main reason behind the sudden floods. According to them, “global warming has changed the type of weather, climate or rainfall. Now when it rains, it rains much deeper. The Pacific also has a La Nino. That too has played a role in the heavy rains.”

Will the situation get worse?

Meanwhile, the flood situation in Bangladesh is expected to deteriorate further. The water level of all the major rivers of the country is increasing. This growth is predicted to continue in the upcoming days. So far, 11 districts have been affected by the floods. Water is flowing over the danger line at 19 points in these areas. The Centre for Flood Forecasting and Warning (FFWC) mentioned it in a statement on June 20. The agency said that water levels had risen in eight of the 109 water level stations monitored by the Flood Forecasting and Warning Centre, decreased in 29 and remained unchanged in four. The FFWC thinks that more rain in such a short time is leading to a severe climate change.