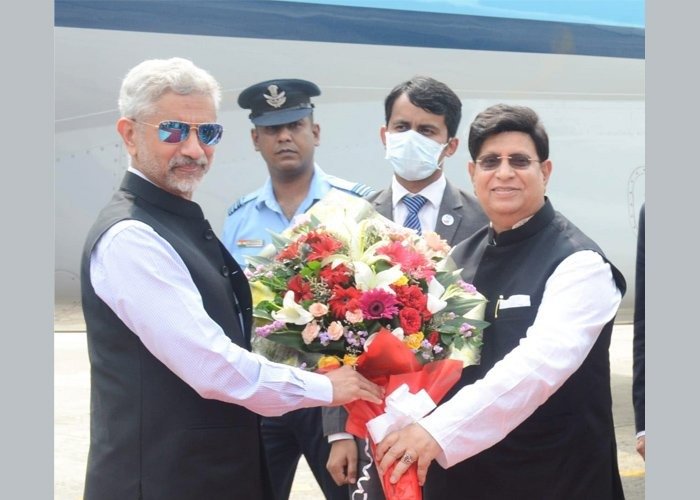 The Indian FM arrived at the Bangabandhu Base of Bangladesh Air Force (BAF) in the capital’s Kurmitola by an Indian Air Force special flight today (April 28).

During his visit, the Indian External Affairs Minister is scheduled to meet Prime Minister Sheikh Hasina at her official residence Ganabhaban at 4pm today. He will hold discussions with Foreign Minister Momen at the Foreign Service Academy at 5pm today. FM Momen will also host an Iftar-cum-dinner in honour of his Indian counterpart. Jaishankar is scheduled to leave for Bhutan on April 29 after wrapping up his Bangladesh visit.

According to the Indian Ministry of External Affairs, Jaishankar’s visit is seen in the context of frequent bilateral high-level visits and exchanges between Bangladesh and India. Both sides commemorate 50 years of the establishment of diplomatic ties.

Dr Momen on April 26 said that his Indian counterpart Jaishankar might bring good news. “May be he’ll bring good news and we’re yet to know what that news is exactly.” Mentioning that the relationship between Bangladesh and India is very warm, Momen said, “We always welcome him. He’ll surprise us.”

Jaishankar has come with the formal invitation for Prime Minister Sheikh Hasina on behalf of Indian Prime Minister Narendra Modi for an impending visit to Delhi – likely to be held in the first week of July.

Earlier, PM Modi paid a state visit to Bangladesh from 26 to 27 March 2021 at the invitation of Prime Minister Sheikh Hasina, to join the celebrations of the Golden Jubilee of the Independence of Bangladesh, the birth centenary of the Father of the Nation Bangabandhu Sheikh Mujibur Rahman and 50 years of establishment of diplomatic relations between India and Bangladesh.

The visits symbolised the partnership of half-a-century between India and Bangladesh that has strengthened, matured and evolved as a model for bilateral relations for the entire region. In an effort to give further impetus to Dhaka-Delhi relations, the two neighbouring countries are now planning to have enhanced engagement including preparation for Hasina’s visit to India at a convenient time this year, officials said.

Minister-level meetings to be held

Before the prime minister’s visit, the next round of Joint Consultative Commission (JCC) meeting will be held in New Delhi, most likely in the next month. The JCC will be co-chaired by Foreign Minister Momen and his Indian counterpart Jaishankar and a date is likely to be finalized during the current visit of the Indian external affairs minister.

FM Momen declared that some meetings need to be held before the JCC. He also said that Bangladesh will raise all the outstanding issues in the meeting.

Momen said Bangladesh always raises issues like Teesta River water sharing and border killing and will reiterate those in the meeting.