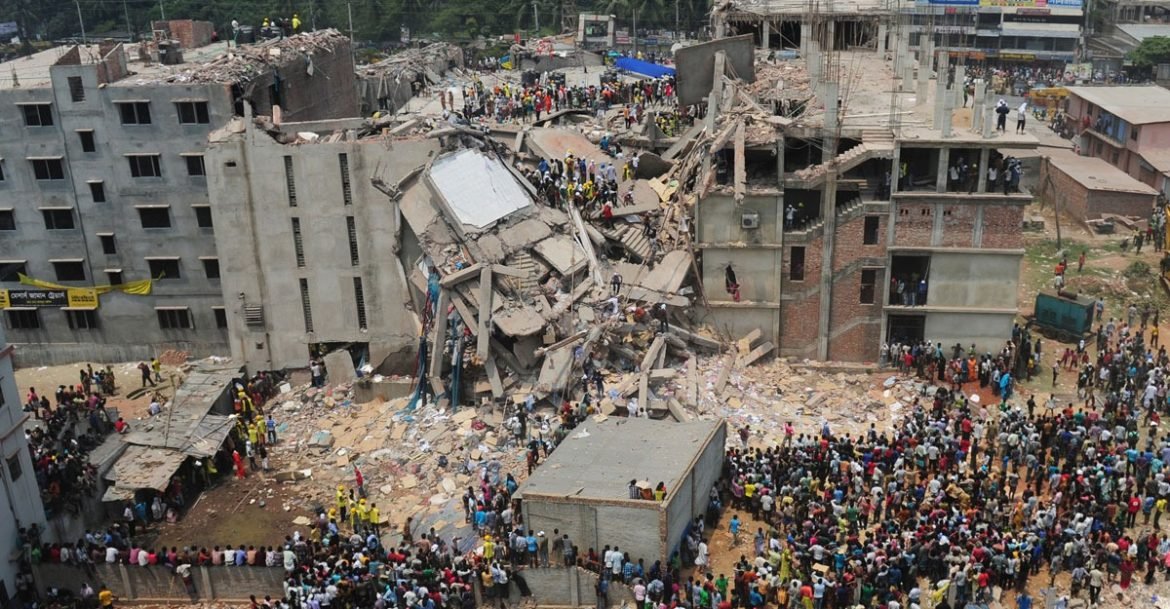 24th April 2013 remains one of the most tragic days in the history of the country as Rana Plaza, which housed several garment factories, collapsed on that ill-fated day. Nine years have gone by, but the affected families and survivors of Rana Plaza collapse are still haunted by the memories of the worst-ever tragedy in the country’s multi-billion-dollar ready-made garment (RMG) industry.

Different right bodies, worker organisations and left-leaning political parties and Rana Plaza Survivors’ Association have undertaken various programmes remembering the tragedy. Many workers’ organisations placed floral wreaths at the base of the Rana Plaza Memorial in the morning. The family members of the deceased and injured victims were also present there. Leaders and activists of different organisations also brought out a procession demanding capital punishment of Rana Plaza owners and compensation for victims’ families.

On the morning of April 24, 2013, Rana Plaza, an illegally-constructed building in Savar which housed five garment factories, came down collapsing, killing at least 1,138 people and injuring over 2,000 others and over 300 remained unfound.

On July 18, 2016, Dhaka District and Session Court Judge SM Kuddus Zaman framed charges against the accused and passed an order to begin the trial. But it got barred as most of the accused appealed to the higher court challenging legality of the order.

On January 31, after clearing the appeals, District and Sessions Court Judge AHM Habibur Rahman Bhuiyan recorded the statement of plaintiff, then Sub-Inspector of Savar police station Wali Ashraf. Prime accused in the case, owner of Rana Plaza Sohel Rana is currently in jail while 40 others are on bail. Over the tragic incident then SI of Savar police station Wali Ashraf filed a murder case accusing the owner and others of dereliction and negligence in building construction.

On June 1, 2015, Assistant Superintendent of Crime Investigation Department (CID) of police Bijoy Krishna Kar submitted charge sheet in the case against 41 people including the building owner Sohel Rana. A total of 594 people were made witnesses in this case.

Over half the victims who survived with injuries report their physical condition as worsening – quadrupling from just 14 percent who reported the same one year ago, said a survey report published on April 18, this year.Among the 56.5 percent who reported their physical condition as worsening in the latest survey, waist pain, headache, pain in hand and leg, and back pain were some of the major problems.

According to ActionAid Bangladesh, who have been conducting the surveys periodically the trend from previous surveys showed that the physical health status of the survivors was slowly improving over the years – but COVID-19 has reversed that progress.

A third of the survivors, or 33 percent, are more or less stable, and 10.5 percent are completely stable. In terms of psychosocial health, 48.5 percent are still in trauma in comparison to 12.5 percent survivors last year.

Currently 31 percent reported that they are more or less stable, and 20.5 percent have recovered fully compared to 25.5 percent last year.

These findings were revealed in a survey conducted among 200 survivors ahead of the 9th anniversary of Rana Plaza tragedy. The current unemployment rate of the survivors is 53 percent while 47 percent survivors are engaged in various types of wage and self-employment. Among them, 67 percent of survivors are unemployed due to their physical condition and 10 percent have mental trauma. Survivors tend to change work frequently as their physical conditions do not allow them to work for long-periods at a time.