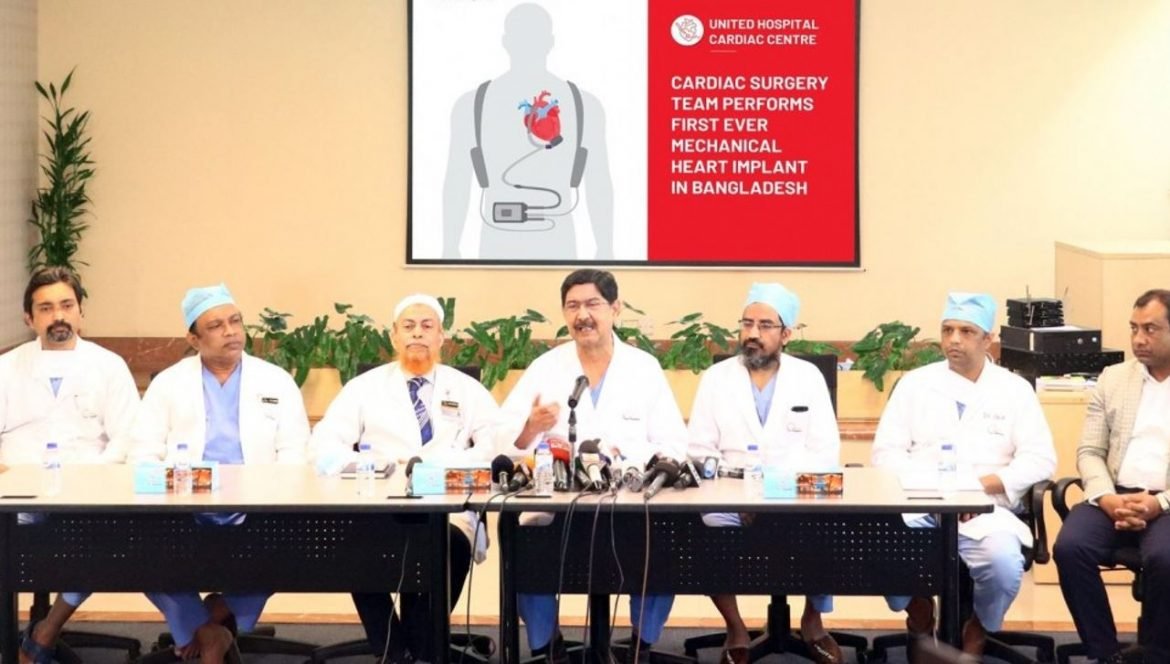 Medical science is advancing rapidly, as a result of which new medical phenomena are constantly occurring in the world. Doctors are achieving unimaginable successes in this sector. Bangladesh is not lagging behind in this success story. For the first time in Bangladesh, mechanical heart has been successfully implanted in human body. This marked the beginning of a new era in the treatment of heart disease in the country.

Beginning of a New Era

United Hospital’s team of doctors ushered the new era in cardiac treatment in Bangladesh as they successfully performed a mechanical heart implantation in a middle-aged woman.

On 2nd March, Chief Cardiac Surgeon and Director of the Cardiac Centre at the United Hospital in the capital. Jahangir Kabir implanted the mechanical heart or Left Ventricular Assist Device (LVAD) in the heart of a 42 year old woman– for the first time in the country.

The patient had been suffering from various cardiac complications for a long time known as chronic heart failure. The patients had taken medical treatment for her heart complications in Singapore, Malaysia and Turkey. Although the woman had received treatment at home and abroad, her heart started to become almost ineffective. Dr Jahangir Kabir and his team placed the mechanical heart called Heartmate-3 in the left ventricle of her heart through a successful surgery which was conducted for about four hours and restored her heart function.

The Device and Cost

“The mechanical heart or the Left Ventricular Assist Device (LVAD) named Hertmate-3 was brought from the US and it cost more than Tk1 crore”, said Dr Jahangir Kabir. “This will add to the cost of surgery. However, with successful surgery, the patient can live a long and healthy life.” Therefore, he seeks all kinds of cooperation from the government for continuation of such expensive treatment in the country.

After the successful surgery, a press conference had been held at the United Hospital, where the head of the surgery team Jahangir Kabir said, “This treatment is for those whose heart is completely damaged. In this method, a device made in the United States is placed under the heart. This device helps the heart to pump actively when successful surgery is performed. That’s why we can call it ‘mechanical heart’.”

“It’s a rechargeable device,” he said. “If placed in the heart, the device activates the red blood cells in the heart and heart works normally. As a result, other parts of the body becomes better. There are many patients in the country who are admitted to the hospital three or four times a month due to heart complications. It is possible to cure these patients easily through this treatment.”

According to the United Hospital, “this team of leading heart surgeons in Bangladesh has performed successful heart surgeries on more than 15,000 people since the inception of the hospital. After four hours of successful surgery, Dr Jahangir Kabir and his colleagues placed the mechanical heart in the left ventricle of the patient’s heart and restored her whole heart function to normal.

The chief physician of the team that achieved the brilliant success said that through the successful operation the country’s distant dream became a reality and it will be a wonderful progress in the medical sector.

“Heart failure is a major cause of death in Bangladesh. Preventing such death by transplanting an artificial heart in the hospital of country was our dream. Now the dream has been fulfilled,” Dr Jahangir Kabir said.

The physician mentioned that there was a long effort behind this success. “We tried for 14 to 15 years for this. In several occasions, all necessary preparations were taken but unluckily the patients died before starting the process,” he said.

The Chief Cardiac Surgeon and Director of Cardiac Centre of the hospital Jahangir Kabir attributed the success to the patients and her family. He said, “The patient and her family contributed largely to the success as they trusted us on the very important matter. We created the confidence on them and they also came forward. As a result the success was attained.”

United Hospital expressed firm joy over the success and stated, “It is hoped that this will greatly reduce the patient’s risk of death and prevent heart failure. Though the installation of this device is not a permanent solution, it is done due to the scarcity of healthy heart. This can be a great alternative solution for the heart transplantation and will be a milestone for cardiac treatment in Bangladesh.”

The hospital’s doctors said that in the current state of medical science, the only treatment in the developed world is to replace the almost dysfunctional heart with another healthy heart. However, if a healthy heart is not available, or if it is too late to get it, or if the condition of the heart is deteriorating rapidly, then a mechanical heart is implanted. The patient’s heart gets some rest and the blood circulation in the whole body becomes normal. As a result, other organs in the body, such as kidney, liver, etc. get a chance to heal. LVAD is the only alternative for some patients with severe heart failure if they are not fit for a heart transplant, which can allow them to spend the rest of their lives in healthy condition.

To conclude, today, more than ten million people worldwide suffer from this complex disease. The prevalence of this disease in Asia is from 1.26 percent to 6.70 percent. Doctors said that this successful surgery will be a glorious milestone in the medical sector of Bangladesh.

Please give us an idea about heart implantation:

Sometimes patient’s heart becomes almost in active due to heart complications and the solution for such patients is heart transplantation. But due to scarcity and difficulty to find a healthy heart or the operation is delayed or the patient’s condition continues to deteriorate rapidly, then a metallic device is placed in the heart to activate the heart. This is called mechanical heart implant.

What kind of device is it really?

It’s a rechargeable device. If placed in the heart, the device activates the red blood cells in the heart and heart works normally. As a result, other parts of the body becomes better.
What’s the cost of this ‘heart’?
The mechanical heart named Hertmate-3 was brought from the United States and it cost more than Tk 1 crore, which will be added to the cost of surgery.

Why do people call it ‘mechanical heart’?

In fact, this treatment is for those whose heart is completely damaged. In this method, a device made in the United States is placed in the heart. This device helps the heart to pump actively when successful surgery is performed. That’s why we can call it mechanical heart’.

How do you feel after this remarkable achievement?

First of all, I’d like to thank my team of doctors for their brilliant efforts. We tried for 14 to 15 years for this. On several occasions, all necessary preparations were taken but unluckily the patients died before starting the process. Finally, we did it this time. The patient and her family also contributed largely to the success as they put faith in us. We created the confidence in them and they came forward. As a result, the efforts paid off finally.”

How will it impact this country’s medical sector?

Through this successful operation, the country’s one distant dream has become a reality and it is indeed a wonderful progress in the medical sector. There are many patients in the country who get admitted to hospitals three or four times a month due to heart complications. Hopefully, it’ll be possible to cure these patients easily through such treatment.