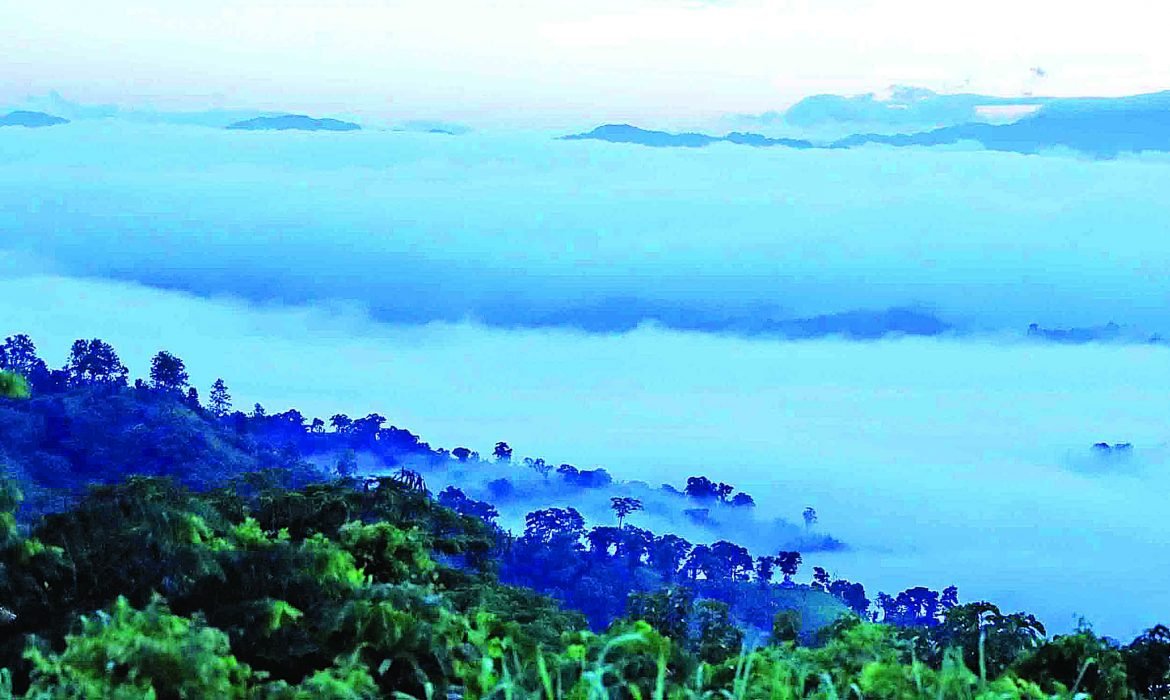 Bangladesh is one of the most mysterious and wonderful countries in Asia covered in greenery as well as undulating hills. The country’s tourist attractions include archaeological sites, historic mosques and monuments, resorts, beaches, picnic spots, forest and wildlife. These scenic beauties offers opportunities for angling, water-skiing, river cruising, hiking, rowing, surfing, yachting and sea bathing as well as bringing one in close touch with the mother nature.

We in our January issue covered five of the most popular tourist spots to visit in Bangladesh. Now in this February issue, we intend to bring before you five more magnificent places of tourism attractions:

Chattogram is the biggest seaport and second largest town in Bangladesh situated close to the Bay of Bengal. It is 264 kilometres east of Dhaka, famous for hill areas, natural beauty and off course the seashore. Chittagong is also known as the town of Muslim Saints.

The beautiful tourist spots in Chattogram are as follows:

Patenga is a sea beach located 14 kilometres south of the port city of Chattogram. It is near the mouth of the Karnaphuli River. The beach is one of the most popular sea sites – stretching for miles near the meeting place of the Bay of Bengal and the river Karnaphuli. The beach is mostly enjoyed by people who come to sit on the concrete slabs and pass the time looking out to the sea, as swimming is not recommended there.

Boga Lake offers nothing but tranquillity, landscapes, and starry nights, with lush greenery and three high peaks surrounding the lake, creating the perfect spot for nature lovers. Legend has it that tribesmen killed the local deity, who reappeared as a dragon that caused an earthquake, which swallowed the nearby village and created this lake.

The Shrine of Bayazid Bostami is another site people visit in Chattogram. Bayazid Bostami was a famous Persian Sufi born in Bostam, Iran. Its shrine area as a complex consists of a tomb surrounded by a brick structure along with an old mosque and a large pond. There is, however, no significant historical evidence about Bostami’s visit in this area.

Foy’s Lake is a man-made lake in the port city. It was created in 1924 by constructing a dam across the stream that came down from the hills in the northern part of Chattogram. The purpose of creating an artificial lake was to provide water to the residents of the railway colony. It was named after Mr. Foy, a Railway engineer, believed to have materialized the project.

Sylhet is such a well-visited and popular tourist destination that no tourist wants to miss a visit. It’s the largest city in Sylhet Division and home to over 500,000 residents. The picturesque beauties of tea gardens, Ratargul Swamp Forest, Tamabil-Jaflong, Kalibari Temple near Jaflong, Bisanakhandi,Tangoar Haor, largest tea garden in Shree Mangal, and Lawachhara Rain Forest are really eye-catching sites in and around Sylhet.

The most popular tourist spots in Sylhet are as follows:

Jaflong is a ‘must-see’ destination for tourists visiting Sylhet. Flowing from the north Khasi mountains, the river Dauki enters Bangladesh under the name ‘Piyain’, along the bank of which lies the spectacular Jaflong. About 62 kilometres north-east from the Sylhet city, Jaflong is in the East Jaflong Union under Guainghat Upazilla. Visitors can hire boats to go to the Zero Point and see the beautiful hanging bridge over the Dauki.

Ratargul is the only freshwater swamp forest in Bangladesh. Despite its existence over a vast stretch of swampland in the not-too-distant past, the swamp forest now occupies an area of only two square kilometres. A dense forest comprising mostly native hijol and koroch trees, Ratargul offers a sanctuary for different species of birds, monkeys, snakes and other reptiles.

At the foot of the Meghalaya ranges in the middle of Tahirpur and Dharmapasha Upazilla under Sunamganj district in north-east Sylhet is a vast swampland popularly known as Tangoar Haor that spans over an area of nearly 100 square kilometres. Cascading from the Meghalaya about 30 waterfalls flow into this large water body engendering a charm that is truly rare. In 2000, it was internationally recognised as a Ramseur site.

Bisnakandi is a village situated in Rustompur Union under Guainghat Upazilla. This is where many layers of the Khasi Mountain meet at a single point from both sides. Flowing from above is a high fall. Adding to its charm are dark clouds hugging the mountain in the rainy season. And flowing underneath towards Bholaganj is a branch of the Piyain. Along the stream flowing from high up in the mountain come huge boulders that are deposited and mined in Bisnakandi.

Cumilla is a well-known tourist destination in Bangladesh. There are various places in Cumilla that fascinate the tourists with many of the attractions there. Lalmai Hills, Bangladesh Academy for Rural Development (BARD), War Cemetery, Maynamoti Museum, Shah Shuja Masque, Cumilla Zoo etc. woo thousands of domestic and foreign tourists every year.

The beautiful tourist spots in Cumilla are as follows:

Mainamati Museum is next to Shalban Bihar. Many valuable antiquities were found during the excavations of Srivadava’s Mahavihara, Kotila Mura, Charpatra Mura, Itakhola Mura, Rupbanmura, Ananda Bihar, Rani’s Bangla, and Bhoj Raja’s Bari Bihar. To preserve and display these antiquities, a west-facing museum was set up in 1965 in front of Shalban Bihar on the south side of Shalban Bihar in Cumilla Kotbari. To the left of the entrance to the museum is a huge bronze statue of Buddha.

Lalmai & Maynamoti Hill is the one of the top tourist attractions of Cumilla widely popular for its natural spots. Its greenery must give a great feel to the eyes of tourists.

Buddis Bhihar was earlier known as Salban Rajar Bari, includes 7th century ruined monuments of Deva Dynasty. It is one of the best and must see historical places in Cumilla.

The beautiful tourist spots in Khagrachhari are as follows:

Among the few attractive fountains in Bangladesh, Teduchara/Toiduchora in Khagrachari 1 and 2 are one of them. The enchanting fountain, located between the green hills and the jungles of the Dighinala Upazila of Khagrachari district, is named Teduchara. From Khagrachari to Teduchara you can go following 2 ways – Daginala and Shimanapara. Going among the Shimanapara will save a lot of time because tracking will be much less.

The Alutila Hills is located at the entrance to the Khagrachari district. It is 7 km from the district headquarters and 5 km from the Tourist Motel. It is located in faraway Matiranga Upazila. The entire Khagrachari town is visible from the top of the hill. The main attraction of the Alutilla tourist center is its mountain cave. The cave is 282 feet in length and it will take 15 minutes to pass from one side of the cave to the other.

It is a pond located at the top of the hill about 1000 feet above sea level, locally known as the Debota Pukur (Pond of God). The pond is about 1600 feet in length and about 600 feet in width. It is located in Nunchari Tripura village on Khagrachari-Rangamati road. This village is 12 km from the tourist motel. And 5 km from Mychari.

Among many fountains in Khagrachari, Richang Jhorna (Fountain) is attractive and interesting. It is about 100 feet high from the chest of the mountain, the water is falling down. The distance from the district headquarters to Alutila, a little west to the main road to the north, the distance to the fountain is about 115 km. The whole journey to the fountain is thrilling. On the way, the endless beauty of high-low green hills, shrubbery, nameless colored wildflowers takes anyone into a realm of imagination.

Rangamati is a popular tourist destination for its beautiful lake, tribes and their culture, vast variety of flora and fauna, waterfalls and hills surrounding the lake, hanging bridge, museum and so on.

The beautiful tourist spots in Rangamati are as follows:

The largest artificial lake in the country was built in 1960 for the hydro-electricity, is the most popular spot for local tourists who comes here to enjoy the crystal water view. A fascinating boat trip for a full day on this lake is worthy. A tragic history behind this lake that, there were 100,000 tribes, mostly Chakma, were displaced for the creation of this today’s lake and about 40% of the land they cultivated gone underwater forever.

The bridge is popular and attractive for its uniqueness, the landmark is iconic, about 100 meters in length. This link-way of Kaptail Lake was set over the lake to bring the architectural beauty and exotic natural view in a single snap.

To reach to this nice waterfall is through the lake. This is one of the key tourist points in Rangamati. People generally hire a boat from the hanging bridge for the full day to visit the rolling water falling down to the lake and on the route the lake has many beautiful surroundings to offer.

This temple was built in 1970 which occupies 33 acres of land holding the pride of the largest Buddhist temple in Bangladesh. Once you step into Rangamati you would sense the holy vibe of serenity and crystal water of Kaptai Lake which can reduce anxieties from your mind. To further purify your mind this place is the best because of its ambiance.

Eight Mega Projects To Change The Face Of Bangladesh

Wooing tourists in Gazipur amid glee and greenery

Seeing a beautiful Bangladesh thru’ the spectacle of...