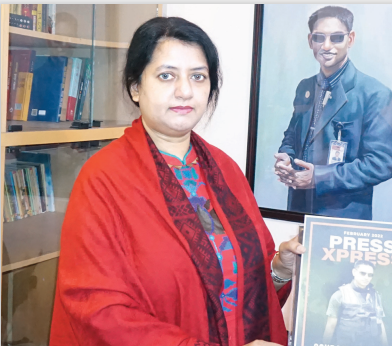 Major Sinha used to address his elder sister as ‘Shampoo’. His sister Sharmin Shahria Ferdous talked about her long journey to justice for her brother’s murder with Press Xpress:

We know that Major Sinha was a wanderer, a traveler; did he have the hobby of traveling since childhood?

He often shared about his love for adventure, I learned about his aim of life that he wrote, after his death. He mentioned everyone should follow their heart and smile. During his missions he traveled to thirty-two countries. Traveling had a specials place in his heart from a very young age. He wanted to travel the whole world.
Did you have any conversation with him while he was collecting information about the illegal syndicate in Cox’s Bazar?
No, he will never do this. Because, he was a very intelligent boy that keeps his family away from his works. If he told us about that we could’ve become tensed and try to reach him which may disrupt his work and the syndicate couldn’t have been exposed. So, he never involved family with his works for our safety

When was the last time you talked to Adnan Bhai? What was his last words?
On his birthday which is on July 26. He was in Cox’s Bazar and I sent him a cake. He texted me his address. When he wasn’t receiving the phone of delivery man. I called him and wished happy birthday and told him to receive the cake.

How and when did you get Sinha’s death news?

The next day of his death was Eid. My husband and I took selfies on morning, then some of Adnan’s course-mate came, they and my husband went out. I called my mother and learned that; police came in our home. My husband wasn’t receiving my call. Then I got tensed and called Adnan. What troubled me more that, his phone was switched off which he never does. Nobody told me and my mother anything. Then, Sister of Adnan’s colleague came to our house at 7 pm. We learned about his death from her.

When did you know it was a cold-blooded murder?

We’re told that it was accident but we were sure that it can’t be just an accident. We finally confirmed about it on 13 December from RAB’s report where it was mentioned that it was a murder.

How did you feel when you heard that a decorated Army Major Major Sinha had been falsely accused?

As a sister, I know it is impossible. I know him better than me. He could never do such thing. How shabby those people are that despite killing him and committing a crime they blame on the victim.

Could you please tell us about your struggles during this long journey to fight for justice?

When it was happened, Allah gave me the strength to fight, we got response and support too. I always seek strength from Allah. We have the verdict from the grace of Allah.

Are you satisfied with the court verdict?

I would say our expectations fulfilled rather than saying we’re satisfied. Alhamdulillah. Main culprits were sentenced to death which fulfilled our expectation but we will be satisfied after the verdict is implemented. With due respect to the court, I would like to give my personal opinion. Some were released. Those released could have taken my brother to the hospital. They also have liability in that case. I would’ve been satisfied if they were punished too

Eight Mega Projects To Change The Face Of Bangladesh