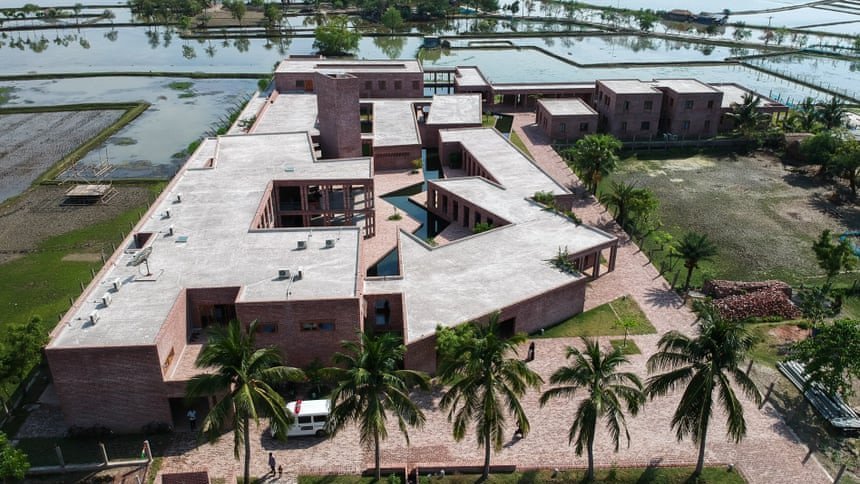 A remote Bangladesh hospital has been awarded the winner of the World’s Best New Building. According to a report published in the UK-based The Guardian on January 25, the Royal Institute of British Architects has announced Friendship Hospital project — designed by architect Kashef Chowdhury, director of Bangladeshi architecture firm Urbana — the winner of the 2021 International Prize for the World’s Best New Building.
A model of climate-conscious design built with the bare minimum of resources, the Friendship Hospital beat off competition from a gallery in Berlin by David Chipperfield, and a cycle and footbridge in Denmark by Wilkinson Eyre. The award winning hospital is located in Satkhira, in Bangladesh’s southwest.
A canal built in the hospital project zigzags its way through the site, collecting valuable rainwater and helping to cool the surrounding courtyards during the sweltering summer months. It also serves as a barrier between the inpatient and outpatient departments, separating the two sides of the site across shared courtyards, without the need for a dividing wall. “There is water everywhere here,” the Guardian quoted architect Kashef Chowdhury as saying.
“But it’s not always the useful kind,” he said, adding that rising sea levels caused by the climate crisis have meant that the surrounding landscape of grain fields has been transformed into shrimp fisheries, while the groundwater has become too saline to use for most purposes. Chowdhury has therefore designed the building to be a machine for rainwater harvesting, with every roof and courtyard surface draining into the central canal, which runs into two storage tanks at either end of the site, the report said.
It is the first “land hospital” for the NGO Friendship, for which Chowdhury has helped to convert several boats into floating hospitals in the past, designed to serve remote communities in the delta region. Built for a tight budget of just under $2 million, their first permanent building provides a medical lifeline for thousands of people in an area that was heavily affected by a major cyclone in 2007.
“When somebody is ill or needs care,” says Chowdhury, “one of the most important things is the mental aspect of it, not just the physical care. I think the kind of spaces you inhabit during treatment — with a view of water and trees, the sounds of birds, the feel of a breeze — goes a long way towards healing.”
Chair of the RIBA jury Odile Decq said the project “embodies an architecture of humanity and protection,” adding that it is “relevant to critical global challenges, such as unequal access to healthcare and the crushing impact of climate breakdown on vulnerable communities,” The Guardian report mentioned.
On receipt of the prize, Chowdhury told The Guardian: “I am encouraged that this may inspire more of us to commit to an architecture of care both for humanity and for nature, to rise collectively to the urgencies that we face today on a planetary scale.”